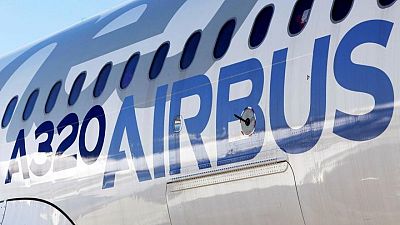 PARIS -A rift between Airbus and engine makers over plans for higher jet output blotted strong aerospace earnings this week, with worries over the supply chain’s industrial capacity masking a deeper tug of war over contrasting business strategies.

With travel demand snapping back in key U.S. and Chinese markets, Airbus wants to almost double jet production in a few years as it capitalises on a bulging order book for new jets and the recent woes of embattled U.S. rival Boeing.

In May, it issued a mix of firm targets and scenarios that could lift narrowbody output to 75 jets a month by 2025 from 40 now, and 60 before the COVID pandemic.

That has rattled engine makers and others who fear the world’s largest planemaker will upset their own recovery by flooding markets with new jets too quickly, forcing existing ones straight into retirement rather than their repair shops.

“The engine makers look at the production plans and see them displacing older airplanes that are still profitable for them,” said Teal Group analyst Richard Aboulafia.

The standoff could accelerate efforts by engine makers to adapt their service-dependent business models by charging more upfront for their engines, Aboulafia said.

Doing so is potentially risky since planemakers also eye a bigger slice of their suppliers’ service revenues.

Few quibble with a smooth return towards pre-crisis levels for in-demand narrowbody jets, through Boeing remains more cautious as it emerges from a separate crisis over its 737 MAX.

“They (planemakers) can feel the momentum coming back,” the head of the world’s largest engine maker GE Aviation, John Slattery, told a Eurocontrol podcast, while pledging to support a return to pre-crisis levels by early 2023 for narrowbodies.

But industry sources say GE’s French engine partner Safran was speaking for many suppliers when it questioned plans to take output swiftly beyond that to uncharted levels.

“I have to say we are not sure that the market has the appetite for such rates and that rates well above 60 can be sustainable,” Safran CEO Olivier Andries told analysts on Wednesday, echoing previous warnings against over-production.

Airbus Chief Executive Guillaume Faury defended the plans, saying he was ready to “do the math” with suppliers based on solid orders. “I’m really disappointed to see that some usual partners are still challenging the rates,” he told analysts.

In public, the debate revolves around the resilience of both demand and a weakened supply chain.

Behind the scenes, the argument aggravates differences that have been simmering for years, some industry sources said.

“There is a legitimate point to make about the industrial worries and appetite for risk among lower-tier suppliers. But it is also legitimate to say that engine makers have to get work out of airplanes already in service,” one industry source said.

Both jetmakers and engine makers have reaped a bonanza from demand for popular narrowbodies used by low-cost carriers, but the way they recoup their investments is generally different.

While planemakers get paid on delivery of new jets, allowing them to absorb fixed costs fairly quickly, engine makers rely on servicing older jets and have to wait years to make money back.

But Airbus’ plans have triggered disagreement over how the burden of the crisis should be shared. Engine makers already face delays in future parts revenues, because the maintenance clock has paused on thousands of jets idled during the crisis.

CFM, a GE-Safran venture which powers all Boeing and some Airbus narrowbody jets, and Pratt & Whitney, which competes with CFM on Airbus jets, have voiced private concerns over the long-term impact of the plans, industry sources said.

As sole supplier on the 737 MAX, which was hit by a recent safety crisis, CFM will also be wary of the signal it sends to the U.S. company if it helps Airbus assume too flamboyant a lead in the market with its A320neo family, one industry source said.

Planemakers say they are the primary risk takers and argue the whole industry has feasted off demand for their products.

They argue that although engine makers see their margins diluted in the short-term by delivering engines for little or no immediate cash, they reap high margins on later repairs.

Tensions over production are just one threat to a fragile balance between business models in the $150 billion jet sector.

Airlines are also under pressure to retire jets sooner for environmental reasons, sometimes in return for COVID bailouts. That too could reduce the number of prized engine overhauls.

A trend towards shorter lifespans was revealed in recent climate reports from Airbus and Boeing, calculating emissions from their jets based on a life around 22 years.

That’s lower than the mantra of 25 years underpinning a growing air finance industry and has potential implications for aircraft prices, leasing profits and future airplane orders.

“The market is going to dictate how many engines the engine makers will produce,” Airbus Chief Commercial Officer Christian Scherer said in a recent interview.

“Ultimately I think you are seeing a convergence in the number of engines and airframes being produced.”