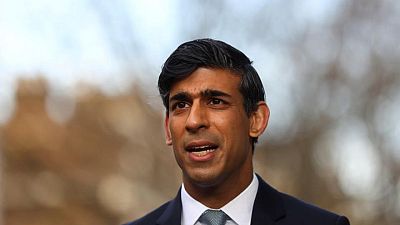 LONDON -British finance minister Rishi Sunak will give a half-yearly update on the public finances and economic outlook on Oct. 27, when he is also likely to outline longer-term public spending plans after his massive coronavirus pandemic stimulus.

Sunak told the Office for Budget Responsibility, the government’s forecasters, on Thursday to begin preparing new economic and fiscal forecasts for publication on Oct. 27.

The last OBR forecasts were announced on March 3, since when the near-term outlook for growth has brightened due to Britain’s rapid roll-out of COVID-19 vaccines which has helped the government to borrow less, so far, than the OBR predicted.

However, it is less clear that the OBR will give an improved medium-term outlook for Britain’s economy which will be key for determining public spending over the coming years.

The after-effects of the coronavirus pandemic and Brexit are expected to weigh on Britain’s growth potential in the coming years.

Sunak has said he wants to move Britain’s public finances on to a more sustainable footing after borrowing hit a post-World War Two high of 14% of gross domestic product in the year to March. Public debt rose to its highest since 1961.

Due to COVID-19 the government postponed a multi-year spending review intended for last year and instead released a one-year plan in November alongside OBR forecasts.

Sunak has previously said he will publish the multi-year spending review this autumn, and it is likely to come alongside the new OBR forecasts. Confirmation of the timing of the review is only expected in September, once parliament returns from its summer recess.

Britain’s finance ministry has not decided whether to hold at the same time a full annual budget which would include new tax measures.

Since 2017 annual budgets have been meant to take place in October or November to allow more time to implement tax changes before the new tax year begins the following April.

But recent budgets have been delayed until March due to a December national election in 2019 and the coronavirus pandemic in 2020.