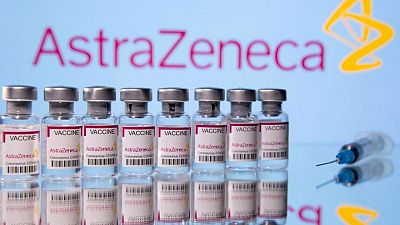 LONDON -AstraZeneca is exploring options for the future of its COVID-19 vaccine and expects greater clarity on the matter by the end of 2021, a senior executive said on Thursday, following a series of setbacks in its race to produce a shot for the world.

Executives emphasised it was too early to say what the decision on the vaccine’s future or the outcome of the review would be.

AstraZeneca agreed to work with the University of Oxford on its COVID-19 shot last year despite having no prior vaccine experience, taking on the project with a pledge not to make a profit during the coronavirus pandemic.

While a $39 billion dollar deal to buy rare drug firm Alexion is much more integral to the company’s business strategy, the COVID-19 vaccine has quickly become the public face of the company’s efforts during the coronavirus pandemic.

“If you ask me, is the vaccine business a sustainable business for AstraZeneca for the next five or 10 years, that big strategic question is under discussion,” Ruud Dobber, head of the BioPharmaceuticals business, told Reuters.

A small group of staff reporting to research chief Mene Pangalos and Dobber are looking into this, he said.

“We need to have that discussion with our senior executive team, and then with the board of AstraZeneca. We are exploring different options, but it is far too early at this stage to conclude that (process),” he said.

“Hopefully before the year ends, we will have a better view how to move forward in the next few years.”

Production problems forced the company to cut deliveries to the European Union earlier in the year, prompting the bloc to launch a legal challenge.

The vaccine has also faced age restrictions due to being linked to rare clots and its application for U.S. approval is taking longer than expected.

Chief Executive Pascal Soriot said he had no regrets over getting involved in COVID-19 vaccines as the company has made an “enormous difference”.

It has delivered one billion doses around the world globally and is celebrated by the British government as a national success story of the pandemic.

Dobber said that AstraZeneca’s “number one commitment” was to deliver hundreds of millions of vaccine doses that were covered by current contracts, but it was open to talks with governments asking the company about supplies for 2022.

“It’s not a distraction,” he said of the vaccine, adding that data on factors such as the durability of the shots are still being collected from the real-world roll-out of the shot.

“There are still a huge number of basic questions we need to answer, moving forwards, and therefore, we’re not in a rush in order to come to a final conclusion about what to do as a next step.”

Asked about the future of the vaccine on an analyst call, Soriot played down Dobber’s comments.

“We are of course are going to look at the way forward, but we haven’t got any specific timeline for this… our priority hasn’t been to look at what we’re going to do moving forward,” he told analysts.

Dobber added that the company would keep its pledge to deliver a broadly available and accessible vaccine. Soriot has said that the vaccine will always be kept affordable for low-income countries, even when the company moves away from a no-profit model.

Results released on Thursday showed sales of the vaccine in the second quarter more than tripled to $894 million from the first three months of the year, making it one of its top-selling products.

But, unlike for rivals including Pfizer, it remains a drag on earnings overall, and Dobber said that if the vaccine business were to be sustainable, the company would have to stop making a loss on it.

“It’s not sustainable to do it without profits, but it’s too early now to speculate about that,” Dobber said.