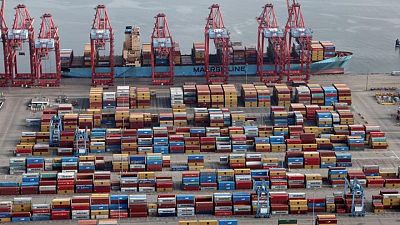 WASHINGTON – The U.S. trade deficit in goods increased in June as imports continued to rise amid strong economic activity, suggesting trade likely remained a drag on growth in the second quarter.

The U.S. economy has rebounded more quickly from the pandemic compared to its global rivals, thanks to massive fiscal stimulus, low interest rates and vaccinations against COVID-19. But bottlenecks in the supply chain have hampered manufacturers’ ability to boost production, drawing in more imports.

“The widening in the advance nominal goods deficit in June is further evidence that net exports will be a drag on second- quarter GDP,” said Ryan Sweet, a senior economist at Moody’s Analytics in West Chester, Pennsylvania.

The goods trade deficit increased 3.5% to $91.2 billion last month, the Commerce Department said on Wednesday. Imports of goods advanced 1.5% to $236.7 billion. There were increases in imports of food, industrial supplies and capital goods.

The report was published ahead of Thursday’s advance second-quarter gross domestic product data.

According to a Reuters survey of economists, the economy likely grew at a robust 8.5% annualized rate last quarter, an acceleration from the first quarter’s 6.4% pace. The anticipated growth pace in the second quarter would be the fastest since 1983 and could mark a peak in the current cycle.

Some of the imports last month were used to replenish inventories at wholesalers and retailers, which could soften the drag on GDP growth from trade.

The Commerce Department reported wholesale inventories increased 0.8% last month after rising 1.3% in May. Stocks at retailers gained 0.3% after dropping 0.8% in May. Retail inventories excluding autos, which go into the calculation of GDP, climbed 0.6% after advancing 0.9% in May.

Business inventories were drawn down in the first quarter.