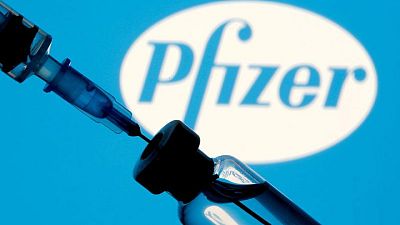 By Manas Mishra and Michael Erman

– Pfizer Inc on Wednesday raised its 2021 sales forecast for its COVID-19 vaccine by 29% to $33.5 billion, and said it believes people will need a third dose of the shot developed with German partner BioNTech to keep protection against the virus high.

The company said it could apply for an emergency use authorization (EUA) for a booster dose as early as August.

Data showed that a third dose generated virus-neutralizing antibodies more than 5 times higher in younger people and more than 11 times higher in older people than from two doses against the more easily transmissible Delta variant of the virus.

“All in all, I think a third dose would strongly improve protection against infection, mild moderate disease, and reduce the spread of the virus,” Chief Scientific Officer Mikael Dolsten said on a call to discuss quarterly results.

Dolsten added that the data suggested levels of antibodies could be boosted up to 100-fold when compared to levels before the third dose.

The company also posted a non-peer reviewed study https://www.medrxiv.org/content/10.1101/2021.07.28.21261159v1 on Wednesday suggesting the vaccine’s efficacy declines over time, and had dropped to around 84% effectiveness from a peak of 96% four months after participants received their second dose.

Pfizer’s decision earlier this month to seek authorization for a third dose drew criticism from U.S. health regulators, who said there was not yet enough data to show booster shots are needed. Scientists from U.S. health agencies have since discussed additional doses for people with compromised immune systems.

Meanwhile, billions of people in other countries are still waiting for a first COVID-19 shot.

Even without boosters, the company’s 2021 sales forecast is expected to move higher as it only accounts for 2.1 billion doses that it has committed to countries out of 3 billion it plans to make this year.

Pfizer said it has shipped over 1 billion doses of the vaccine since December. The U.S. drugmaker records most of the combined sales from the vaccine, and splits expenses and profit 50-50 with its German partner.

Pfizer, whose shot was authorized in the United States, Europe and other regions around the world in December of 2020, has won new orders as rivals such as AstraZeneca Plc and Johnson & Johnson have faced manufacturing and safety hurdles.

Pfizer also competes with U.S. mRNA vaccine maker Moderna Inc, which has not been able to scale up production as quickly as its much larger rival.

Pfizer and BioNTech plan next month to test a version of the vaccine specifically designed to take on the fast-spreading Delta variant, with the first batch already manufactured, Pfizer said. The variant now accounts for more than 80% of new U.S. COVID-19 cases and has also become dominant in many other countries.

The U.S. Food and Drug Administration recently asked Moderna to expand the size of its pediatric trial.

Pfizer Chief Executive Albert Bourla said the company expects to be able to stick to its timeline to apply for an EUA for the vaccine in children under 12 in September, despite also having been approached by the FDA about new study requirements.

“We are not changing right now our expectations,” Bourla said. “If we need to do more in less time, we will try to accommodate that.”

The vaccine is helping drive a large part of the company’s forecast, but Pfizer’s base business is also growing, said Mizuho analyst Vamil Divan.