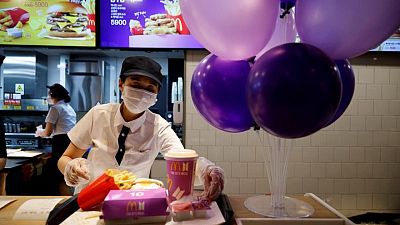 By Aishwarya Venugopal and Hilary Russ

The fast-food chain also raised its guidance for fiscal 2021, saying a slightly quicker than expected recovery should lead to global systemwide sales growth in the mid- to high-teens versus mid-teens previously.

Same-store sales for the world’s biggest fast-food chain jumped 40.5% in the second quarter and exceeded the pre-pandemic levels of 2019 for the second straight quarter. Analysts were expecting a 39.81% rise.

Shares were down more than 2.5% as McDonald’s still sees business uncertainty due to pandemic-related stops and starts in markets around the world, especially as the Delta variant spreads.

Even so, “people are venturing out and establishing new routines,” chief executive officer Chris Kempczinski said during a call with analysts.

Finding enough staff to power restaurants is also still “challenging” amid a wide labor shortage in the United States and Europe, he said.

That has slowed U.S. drive-thru service times by 3 seconds, but applications are increasing in U.S. states that ended federal stimulus benefits, and wages are up about 5%, he said.

Currently about 70% of McDonald’s U.S. dining rooms are open, but Kempczinski said nearly all should be open by the Labor Day holiday in September.

Fast-food chains have successfully weathered most of the impact from lockdowns, with drive-thrus, competitive pricing and a sharp focus on core menu items driving demand.

The Grammy-nominated boy band BTS‘s meal was launched by McDonald’s in nearly 50 countries and includes chicken McNuggets, fries and two dips. It is also still seeing increased sales from the February launch of a line of new crispy chicken sandwiches.

Besides fresh additions to its menu, McDonald’s U.S. sales jump was driven by larger order size and menu price increases, which helped it counter labor shortages and higher ingredient costs.

Comparable U.S. sales rose 25.9% versus a year earlier and nearly 15% compared to 2019. Analysts were expecting 23.84% U.S. sales growth, according to IBES data from Refinitiv.

Total revenue surged by a better-than-expected 57% to $5.89 billion in the three months ended June 30, compared to a year ago when McDonald’s posted a 30% drop due to coronavirus restrictions.

Net income more than quadrupled to $2.22 billion and excluding certain items, it earned $2.37 per share beating expectations of $2.11 per share.