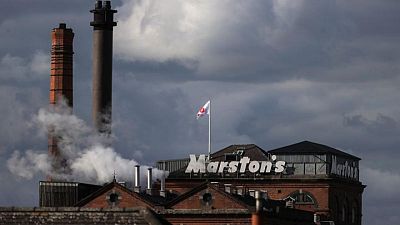 -Pub operator Marston’s on Wednesday joined industry peers in calling on Britain to make a coronavirus tax relief permanent, as the hospitality sector looks to bounce back from the pandemic.

Britain last July cut value-added tax (VAT) for cafes, restaurants and hotels to 5% from 20% as a temporary measure. The government is planning to introduce an interim rate of 12.5% for six months from October before reverting to 20%.

“The tone of Government messaging will be an important influence on consumer confidence,” Marston’s Chief Executive Ralph Findlay said in a statement.

“We believe that a Government review of the business rates system is long overdue and that VAT reduction should be permanent since the hospitality industry remains one of the most heavily taxed sectors,” said Findlay, who is due to step down later this year after two decades in the role.

Findlay said the short-term outlook was uncertain and “operationally disrupted”, and a permanent tax cut would go a long way in boosting employment across the industry.

Over the past year, pubs across Britain have laid off thousands of workers, while labour shortages are a concern as economies reopen.

Marston’s peer J D Wetherspoon also criticised tax rates on the sector, and warned a 12.5% VAT rate would increase its food prices by around 40 pence per meal. The British Beer and Pub Association also backs lower VAT on food in pubs.

Marston’s, in a trading update, said its performance since May had exceeded its expectations, thanks to the Euros soccer tournament, warmer weather and outdoor seating. Its shares were 3.7% higher by 0725 GMT.

An easing of lockdown restrictions helped drive earnings and positive cash flow in May and June, and sales have risen after most restrictions were eased last week, the company said.