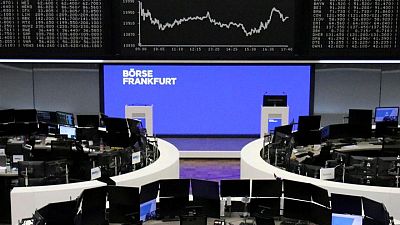 – European stocks lost ground on Tuesday after falls in Chinese shares and Reckitt Benckiser’s warning on margins ahead of earnings updates from big fashion retailers later in the day.

The pan-European STOXX index fell 0.5% in its second straight session of losses.

Worries about tighter regulation of China’s heavyweight technology sector fuelled a selloff in global markets this week despite optimism about the ongoing U.S. and European earnings season.

Dutch company Prosus, which has a stake in Chinese technology giant Tencent, slumped 7.2% to the lowest since May 2020, after Chinese stocks sank to multi-month lows.

Lysol-maker Reckitt tumbled 8.4% and logged its worst day since February 2003 as it joined other top consumer goods companies with a warning its margins will be squeezed this year by higher costs.

“For years, the market has assumed that big consumer goods companies had such strong brands that it was easy to pass on any extra costs to the customer in the form of higher prices,” said Danni Hewson, financial analyst at AJ Bell. “Unilever recently showed that wasn’t quite the case, and now Reckitt has also poured cold water on that theory.”

Investors are awaiting earnings from U.S. technology companies later in the day, as well as the Federal Reserve’s decision on interest rates and economic outlook at the end of its two-day policy meeting on Wednesday.

In Europe, 104 companies in the STOXX 600 have reported earnings so far. Of these, 64.4% exceeded analyst estimates, as per Refinitiv IBES data. In a typical quarter, 51% beat estimates.

Peers Kering and Moncler, expected to report results after markets close on Tuesday, slipped amid the broader market selloff.