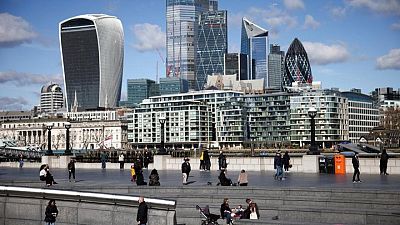 By Huw Jones and Abhinav Ramnarayan

LONDON -Britain has eased rules for so-called special purpose acquisition companies (SPACs) to attract more listings to London, just as global regulators have put a watch on SPACs, which may already be peaking in popularity.

After a surge in activity in SPACs or “blank check” companies on Wall Street and more recently in the European Union and emerging markets, Britain is keen that London is not left behind.

SPACs list on an exchange and must use the proceeds to buy an existing or target company within a set timeframe. This process provides a quicker route to a stock market listing as it sidesteps the lengthy process that leads to an initial public offering.

Under previous UK rules, shares in SPACs were suspended when a target company was identified, effectively trapping investors and putting them off participating in the UK market.

The Financial Conduct Authority in April had proposed an easing of the rules, waiving the suspension rule if a SPAC raised at least 200 million pounds ($275.66 million) from its float.

On Tuesday, the watchdog cut this to 100 million pounds in its final version of the rules.

“The final rules aim to provide more flexibility to larger SPACs, provided they embed certain features that promote investor protection and the smooth operation of our markets,” the FCA said in a statement.

To ensure investors are protected, the FCA also said that investors have redemption rights ahead of a proposed acquisition and a shareholder vote. The new rules come into effect on Aug. 10.

“The rules eliminate the damage unique to UK SPACs of investors being stuck,” said Charles Howarth, partner at CMS law firm. “The timing, however, is not ideal, given we are two years into a U.S. SPAC boom that many commentators feel already has too much money chasing too few viable targets.”

Earlier on Tuesday, the International Organization of Securities Commissions (IOSCO), which includes national regulators like the FCA and the U.S. Securities and Exchange Commission, said it has created a group to monitor SPACs.

“While SPACs may offer alternative sources of funding and provide opportunities for investors, they may also raise regulatory concerns,” IOSCO said in a statement.

The EU’s European Securities and Markets Authority earlier this month set out detailed guidance on what SPACs should tell investors about risks, business strategy and criteria for selecting target companies.

In the United States, the SEC has ramped up an inquiry into blank check acquisitions, homing in on potential conflicts of interest created when banks act as underwriters and advisers on the same deal, sources have told Reuters.

While the SPAC frenzy has peaked in the United States, bankers told Reuters that they expect around 30-40 blank cheque vehicles to launch in Europe in the second half of the year, with up to 15 of them choosing London after the new rules come into effect.

SPAC veterans Chamath Palihapitiya and Ian Osborne are said to be looking at teaming up for a blank cheque foray in London, sources familiar with the situation said.

Several other private equity firms and corporates are also considering SPAC listings in London and elsewhere in Europe, bankers said.

“The FCA appears to have struck the right balance between protecting investors and making the London Stock Exchange more competitive,” said Delphine Currie, a partner at law firm Reed Smith. “Today’s announcement could be the moment that kick-starts SPAC listings in the UK.”