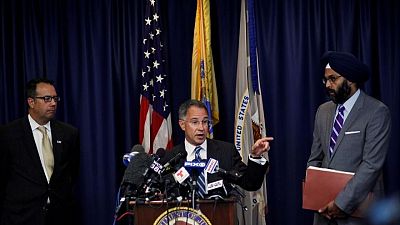 WASHINGTON – When former New Jersey Attorney General Gurbir Grewal starts work at the U.S. Securities and Exchange Commission (SEC) on Monday, he will be the agency’s first incoming enforcement director without recent ties to corporate America since 2005.

Grewal, 48, landed the role running the 1,300-person SEC unit after predecessor Alex Oh quit days into the job due to issues related to her private practice work. Progressives, including non-profit the Revolving Door Project, pushed for her ouster, in a political fracas that will put pressure on Grewal to deliver results.

“Grewal’s background is very encouraging,” said Eleanor Eagan with the Revolving Door Project. “We will be watching.”

The first Sikh-American attorney general, Grewal became New Jersey’s chief law enforcement officer in 2018. Other than two stints in private practice, he has spent the majority of his career as a federal prosecutor in Brooklyn and New Jersey, and as chief prosecutor for Bergen County.

While best-known for his work targeting police brutality and Trump administration policies, Grewal has prosecuted or overseen a slew of financial crime cases.

As chief of New Jersey’s economic crimes unit from 2014 to 2016, Grewal pored over bank transaction reports to dig up cases, said Intrater.

“He has real chops in this area,” he added.

Grewal declined to be interviewed, but ten former colleagues and lawyers familiar with his work told Reuters he is known to be exceptionally well-prepared in court, undaunted by challenging cases, and dogged.

“Gurbir enjoys a reputation as being a 20-hour-a-day guy,” said John Carney, who ran the same economic crimes unit from 2002-2005.

Tough enforcement is a priority for Democrats who say the Trump administration was soft on Wall Street. Under Trump, the SEC focused much more on smaller-scale fraud instead of big corporations, according to Georgetown law professor Urska Velikonja.

In contrast, the sources said, Grewal will be willing to pursue big companies and challenge them in court rather than settling for a fine, a common practice which Democrats say doesn’t deter corporate wrongdoing.

“As a career prosecutor accustomed to the courtroom, he won’t be afraid to aggressively push matters to trial,” said Carney.

According to Paul Fishman, a former federal prosecutor who hired Grewal in 2010, he is also willing to pursue complex technology-based cases which are on the rise as prosecutors lean more on data analysis and target fintech firms and cyber crimes.

Grewal has overseen hundreds of cryptocurrency investigations and in 2015 prosecuted hackers who sold inside information stolen from corporate press releases.

Some question whether Grewal has enough securities law expertise to take on big, complex cases.

“It is a highly technical area of law and it’s going to be a learning curve,” said Erik Gerding, a University of Colorado law professor.

Former colleagues said Grewal is measured and unlikely to bite off more than he can chew.

“Gurbir is someone who will look to hold decision-makers in companies accountable, but also understands the investing public wins when justice is served,” said Craig Carpenito, former U.S. Attorney for New Jersey, who has worked with Grewal.

“Sometimes that means walking away from a case when you don’t have it.”

Acting chair Allison Lee earlier this year gave senior enforcement staff power to open probes which had been stripped from them by the previous leadership.

She also reversed a 2019 policy that critics said made it too easy for companies to continue doing business as usual once they entered settlement negotiations.

“This isn’t going to be an SEC with a lot of fear,” said Intrater.

The son of Indian immigrants, Grewal said he moved into government as result of the September 11, 2001, attacks.

“I began to think folks didn’t understand that you could look different and still love and serve this country, so that was my trigger,” Grewal said at a 2020 Montclair State University commencement.

He sued the Trump administration over environmental rollbacks and fought its immigration policies. And as Bergen County prosecutor and later as attorney general, Grewal fought towns’ restrictions on religious observance by Jewish communities.

He has spoken candidly about his own experiences of racism, telling PBS in 2018: “I’ve developed thick skin throughout my career.”