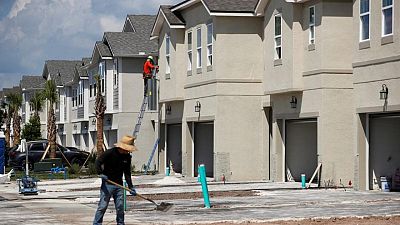 WASHINGTON – Sales of new U.S. single-family homes tumbled to a 14-month low in June and sales in the prior month were weaker than initially estimated, the latest signs that expensive lumber and shortages of other building materials were hurting the housing market.

The third straight monthly decline in sales reported by the Commerce Department on Monday followed news last week that permits for future homebuilding dropped to a nine-month low in June while home resales rebounded modestly. Higher production costs are forcing builders to scale back, keeping supply tight and boosting home prices to the detriment of first-time buyers.

“Home builders continue to hold back on contracts for new homes given input cost and availability uncertainties, with significant uncertainty about what it will cost to build a house and when it can be delivered,” said David Berson, chief economist at Nationwide in Columbus, Ohio. “Until builder costs and supply-chain problems become less of an impediment, it is hard to see new sales picking up significantly in the near term.”

New home sales fell 6.6% to a seasonally adjusted annual rate of 676,000 units last month, the lowest level since April 2020, the Commerce Department said on Monday. May’s sales pace was revised down to 724,000 units from the previously reported 769,000 units.

Economists polled by Reuters had forecast new home sales, which account for a small share of U.S. home sales, increasing 3% to rate of 800,000 units in June.

New home sales are drawn from a sample of houses selected from building permits and tend to be volatile on a month-to-month basis. Sales plunged 19.4% on a year-on-year basis in June, the first annual decrease since the COVID-19 pandemic.

Massive fiscal policy and historically low mortgage rates are driving demand for housing, which was further boosted by the pandemic as millions of Americans worked from home and took online classes.

But supply has lagged behind, with builders constrained by soaring lumber prices as well as shortages of other building materials, household appliances, land and labor.

Though lumber prices have dropped sharply from May’s record highs, that is being tempered by wildfires in the Western United States and British Columbia in Canada. The backlog of single-family homes approved for construction but yet to be started surged in June to the highest level since October 2006.

“It will probably take months for lower lumber prices to flow through to the price of new homes. Also, some of the recent decline in lumber prices has been reversed due to the impact of wildfires,” said Nancy Vanden Houten, lead U.S. economist at Oxford Economics in New York.

U.S. stocks were trading higher. The dollar fell against a basket of currencies. U.S. Treasury prices were mixed.

The housing market was one of the economy’s star performers during the pandemic, posting double-digit growth for three straight quarters. That streak likely came to an end in the second quarter, with residential investment believed to have had a neutral impact on gross domestic product.

The government is scheduled to publish its snapshot of second-quarter GDP on Thursday. According to a Reuters survey of economists, GDP growth likely increased at an 8.6% annualized rate last quarter, an acceleration from the first quarter’s 6.4% pace. The anticipated growth pace in the second quarter would be the fastest since 1983 and also likely mark a peak in the current cycle.

A separate report on Monday from the Federal Reserve Bank of Dallas showed business activity in Texas cooling in July. Though production at factories expanded this month, a gauge of future output slipped eight points to a still-high reading of 48.4.

“The somewhat softer reading on conditions six months from now is a signal that producers know this booming period won’t last forever,” said Edward Friedman a senior economist at Moody’s Analytics in West Chester, Pennsylvania. “Fiscal stimulus of the magnitude in early 2021 will come to an end, interest rates will ultimately start to rise, and the resulting weight on equity markets will lead to deceleration.”

Last month’s drop in new home sales was concentrated in the populous South, the Northeast and West. Sales rose in the Midwest. The median new house price increased 6.1% from a year earlier to $361,800 in June. Sales were concentrated in the $200,000-$749,000 price range. Sales below the $200,000 price bracket, the sought-after segment of the market, accounted for only 2% of transactions last month.

About 77% of homes sold last month were either under construction or yet to be built.