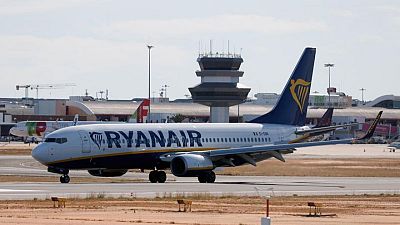 Shares in the Irish budget airline, Europe’s largest, rose more than 4% to 16.44 euros despite a loss of 273 million euros ($322 million) in its normally profitable first quarter and fares that were a third lower than in the same period of 2019 before the pandemic.

In May the airline forecast that it would fly between 80 million and 100 million passengers in the 12 months to the end of March 2022, against a pre-pandemic peak of 149 million.

But Ryanair adjusted that on Monday to bewteen 90 million and 100 million and O’Leary told analysts that, without disruption, it will be at “the upper end of that range”.

A surge in summer bookings has lifted passenger numbers from one third of 2019 levels in June to almost two thirds in July at about 9 million.

O’Leary said he expects to fly about 10 million passengers in each of the last five months of the year, boosted by pent-up demand from individuals and businesses, bringing it to roughly 90% of 2019 levels in November.

“If you haven’t met your suppliers for the last 18 months you need to get back and see them. If you haven’t made the sales calls, you’re not gonna do that on Zoom,” O’Leary said.

Ryanair flew 27.5 million passengers in the year to March 2021. O’Leary said he expects to exceed 2019 traffic levels of 149 million next year.

The collapse of some rivals and capacity cuts planned by others are likely to reduce European short-haul capacity by about 20% over the next two years, O’Leary said.

That will allow Ryanair, which is due to take delivery of 200 Boeing MAX jets over the next four years, to expand rapidly while increasing fares, he said. The first 10 of those planes, which were delivered in recent weeks, are performing “spectacularly”, he said.

“I don’t think, certainly in my 30 years in this industry, post 9/11, post Cold War, there has never been a growth opportunity in front of Ryanair such as we have at the moment,” O’Leary said.

The number of its flights serving primary rather than small regional airports is likely to increase to 80% from 70% currently, he said.

Ryanair is in talks with Boeing about a new order of the larger MAX 10 but wants lower prices before signing the deal, O’Leary said.

Ryanair said it remains impossible to provide a formal profit forecast for the current financial year but said it cautiously expects to post a small loss or break even.

Ryanair’s average fare was 24 euros in the April-June quarter, down from 36 euros in the same period of 2019.

The average number of empty seats is likely to fall from 27% in the April-June quarter to a more normal level of less than 10% early next year, said finance chief Neil Sorahan.