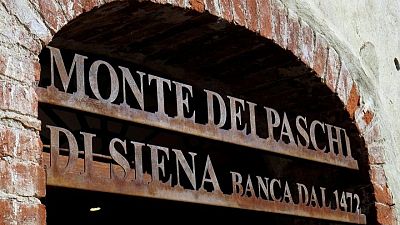 By Giuseppe Fonte and Valentina Za

ROME – Italy’s Treasury is exploring a plan to hive off most of the legal risks weighing on Monte dei Paschi after shelving an alternative insurance scheme that was too costly, three sources close to the matter said.

Legal risks of around 10 billion euros have long posed one of the main hurdles to Italy’s efforts to cut the 64% stake the state owns in Monte dei Paschi (MPS) after a 2017 bailout.

The absence of a firm solution to the legal problems threatens to further prolong the Treasury’s struggle to return MPS to private hands.

The government of Prime Minister Mario Draghi is under pressure to find a solution for MPS, which needs more capital only four years after its 5.4 billion euro state bailout.

The landmark deal will reduce claims by 3.8 billion euros. The Treasury is working to further lower remaining legal risks below 5 billion euros, sources have said.

But even after cutting the claims, the three sources said a scheme the Treasury has been working on for months to allow MPS to insure its legal risks and make it easier to find a buyer is too costly for the Tuscan bank’s weakened finances.

Under the scheme, state-owned exports insurance agency SACE and other private players would have provided protection for the risks against the payment of fees.

The scheme, however, also failed to solve another key problem: the joint liability MPS and its acquirer would remain subject to under Italian law vis-à-vis potential plaintiffs.

The Treasury has now revived an earlier plan that entailed spinning off MPS‘ legal risks and keeping them in state hands, a move that needs clearance from European Union competition authorities, the sources said.

Deliberations are still preliminary and a decision on how to proceed can only be taken in agreement with MPS‘ buyer, one of the sources said, adding that if Rome opted for the spin-off scheme it would be a long and complex process.

The Treasury has been trying to convince UniCredit to take on its ailing rival but Italy’s number 2 bank is focused on an internal revamp under new CEO Andrea Orcel.

Banking stress test results on Friday are expected to highlight MPS‘ vulnerability, though a person familiar with the matter said capital needs should not exceed the 2.5 billion euros MPS has already said it plans to raise by mid-2022.

The government faces calls to delay the sale by the co-ruling 5-Star Movement and the right-wing League party, lawmakers say.

Union representatives staged a protest in Rome on Monday calling for safeguards for MPS workers.

On Tuesday, Deputy Economy Minister Laura Castelli will speak about the Treasury’s re-privatisation plans before a parliamentary committee conducting an inquiry into the banking system under the leadership of 5-Star MP Carla Ruocco.

The Treasury is working with Bank of America and Orrick to re-privatise MPS. Mediobanca and Credit Suisse are advising MPS.