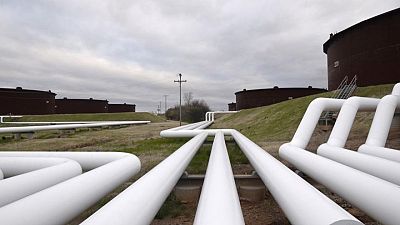 NEWYORK -Oil prices steadied on Monday after a choppy session as the spread of the COVID-19 Delta variant stoked fears about fuel demand, but losses were limited by forecasts that crude supply will be tight the rest of the year.

Early in the session, both benchmarks fell by more than $1 a barrel.

“Risk appetite has clearly massively improved over the last week and just like other risk assets, oil is taking a breather ahead of an intense few days,” Craig Erlam, senior market analyst at OANDA said.

“The second quarter recovery has got pulses racing at the prospect of what’s to come. The next wave of COVID is a downside risk to that but not to the extent that the previous surges have. Optimism is still strong and for good reason.”

Some fear China’s oil imports could grow this year at the slowest rate in two decades despite an expected rise in refining rates in the second half, due to Beijing’s crackdown on misuse of import quotas combined with the impact of high crude prices.

“The Delta variant is still spreading and China has started to clamp down on teapots (independent refiners), so their import growth would not be that much,” said Avtar Sandu, a senior commodities manager at Singapore’s Phillips Futures.

Reports from India also point to only muted oil demand, Commerzbank analysts said in a note.

“Oil imports in June decreased to a nine-month low, while crude oil processing was only marginally above the low May level, which was influenced by the pandemic restrictions,” they said.

Still, both crude benchmarks last week recovered from a 7% slump early in the week and marked their first weekly gains in two to three weeks, boosted by strong U.S. demand and expectations of tight supplies.

Global oil markets are expected to remain in deficit despite a decision by the Organization of the Petroleum Exporting Countries and its allies, collectively known as OPEC+, to raise production through the rest of the year.

“There is seemingly a battle within the energy complex between the prevailing supply deficit engineered by OPEC+ and the threat of the COVID-19 Delta variant in regions with low vaccination rates,” said StoneX analyst Kevin Solomon.

“The slow take-up of vaccinations will continue to limit some upside in oil demand in those regions, and there will be intermittent spells in the recovery in the coming months.”