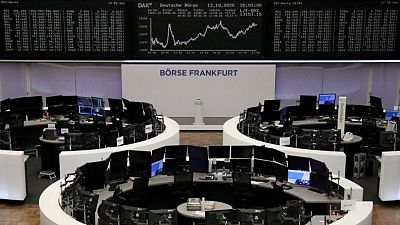 NEWYORK -U.S. stocks touched record highs in choppy trade on Monday and the dollar weakened, as investors avoided making new, bold bets before this week’s Federal Reserve policy meeting, which might offer clues on the outlook for monetary policy. The performance in U.S. shares contrasted with sharp losses in Asia overnight, when MSCI‘s broadest index ofAsia-Pacific shares outside Japan fell 2.1%to its lowest since December, hurt by concerns over tighterregulations in China. In the United States, investors will closely parse comments by Federal Reserve Chair Jerome Powell on Wednesday after a two-day policy meeting for clues on how the central bank will start tapering its asset purchases, its assessment of inflation risks, and the future of interest rates. “Powell will likely highlight that the recovery is on trackbut COVID remains a key downside risk,” analysts at Bank ofAmerica said in a research note, adding that details about the Fed’s tapering of asset purchases would probably be revealed in future meetings.

After vacillating between modest gains and losses for most of the day, U.S. stock indexes managed to nudge higher to eke out record closes.

Speculation that online retailing giant Amazon.com Inc might accept bitcoin as payment sparked the latest rally, and short sellers covering their positions added to the surge.

The dollar has gained nearly 4% from a low on May 25 as animproving U.S. economy bolstered the outlook for the Fed tostart paring asset purchases as early as this year.

Indeed, investors have been pulling money out of Asian andemerging market stocks and putting them into U.S. shares instead, attracted by forecast-beating earnings and a recovery in the U.S. economy.

Bond markets have remained remarkably untroubled by theprospect of eventual tapering. Yields on U.S. 10-year notes have fallen for four weeks in a row – they slipped to a low of 1.221% on Monday before rebounding to 1.2946%. But the drop in Treasury yields has done little to underminethe dollar, in part because European yields have fallen evenfurther amid expectations of continued massive bond buying bythe European Central Bank. Gold prices also weakened as investors turned cautious ahead of the Fed policy meeting. Spot gold dropped 0.2% to $1,797.64 an ounce. U.S. gold futures fell 0.23% to $1,797.20 an ounce. [GOL/]