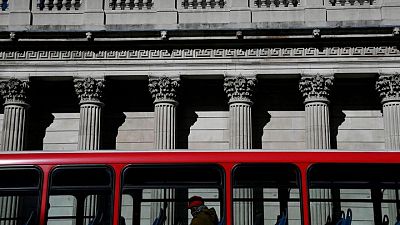 LONDON – Two Bank of England officials said earlier this month that the time is approaching for action to fend off higher inflation, but others say the jump in prices is likely to be temporary and cutting stimulus now would be risky for Britain’s economy.

A third group prefers to wait for more evidence which will be discussed at the BoE’s Monetary Policy Committee which is due to announce its next policy decisions and forecasts for the economy on Aug. 5.

Below are highlights of BoE policymakers’ recent comments as they consider their next steps with their 895 billion-pound ($1.23 trillion) bond-buying programme and near-zero benchmark interest rates.

July 15: “In my view, if activity and inflation indicators remain in line with recent trends and downside risks to growth and inflation do not rise significantly (and these conditions are important), then it may become appropriate fairly soon to withdraw some of the current monetary stimulus … For me, the question of whether to curtail our current asset purchase program early will be under consideration at our forthcoming meetings.”LESSWORRIEDABOUTINFLATION

July 26: “I think it will remain appropriate to keep the current monetary stimulus in place for several quarters at least, and probably longer. And when tightening does become appropriate, I suspect not much of it will be needed, given the low level of the neutral rate.”

July 22: “While we know it’s going to go further over the next few months, I’m not convinced that the current inflation in retail goods prices should in and of itself mean higher inflation 18-24 months ahead, the horizon more relevant for monetary policy.”

But Broadbent said he was less certain about how the pandemic had affected the ability of Britain’s labour market to respond to post-pandemic labour shortages: “I’m more uncertain about this process, and the implication for costs in aggregate, than about the transitory nature of goods-price inflation.”

July 15: “What we will have to do, again, is go through all the evidence and assess to what extent we think the sorts of things that underlie (higher inflation) are likely to be transitory … I do react somewhat to people who say ‘the Bank of England’s being casual about it’.”