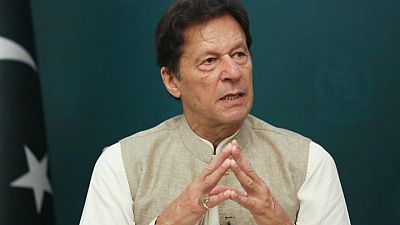 The Pakistani leader’s phone number was on a list of what an investigation by a group of 17 international media organisations and Amnesty International said were potential surveillance targets for countries that bought the spyware.

“In view of the gravity of these reports, we call on the relevant UN bodies to thoroughly investigate the matter, bring the facts to light, and hold the Indian perpetrators to account,” it said.

India’s foreign ministry did not immediately respond to a request for comment on the statement.

The Indian government has already faced calls by domestic political opponents to investigate allegations of spying on officials including the main opposition leader, Rahul Gandhi.

Delhi has not responded to the allegations.

The investigation published by the media organisations on Sunday said spyware made and licensed by Israeli company NSO had been used in attempted and successful hacks of 37 smartphones belonging to journalists, government officials and human rights activists.

NSO has said its product was intended only for use by vetted government intelligence and law enforcement agencies to fight terrorism and crime.

Arch-rivals and neighbours, Pakistan and India have fought two of their three wars over the disputed Himalayan region of Kashmir, which both claim in full.

The statement by Pakistan’s foreign office said Delhi had long been using such tactics in Indian-administered Kashmir, an accusation to which India did not immediately respond.

“We are closely following these revelations and will bring the Indian abuses to the attention of appropriate global platforms,” the statement said.