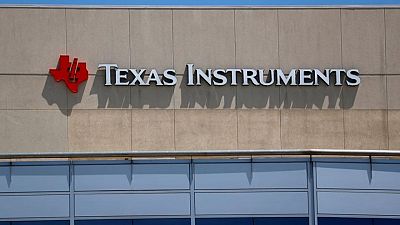 By Stephen Nellis and Chavi Mehta

-Two major chipmakers this week gave very different views of whether soaring demand for semiconductors will start to ease in the second half of the year, and it may take another round of earnings next week to settle the question.

Texas Instruments on Wednesday gave a third-quarter sales forecast that was essentially flat, with company executives declining to say what the year’s final quarter might look like, a hint that orders might be slowing.

By contrast, Intel Corp on Thursday raised its full-year forecast, with Chief Executive Pat Gelsinger saying it could take the chip industry two years to catch up with “explosive demand” and predicting that a boom in PC sales driven by pandemic work-from-home arrangements would carry through next year.

Analysts, however, saw the bump in Intel’s outlook as driven by a strong, already-ended second quarter, and said that it pointed to a weaker final quarter of 2021. Investors agreed, knocking as much as 6.3% off the company’s shares by 1:30 p.m. Eastern Time on Friday.

Kinngai Chan, analyst at Summit Insights Group, simply did not believe Intel’s predictions that the PC market will keep growing through next year.

“We disagree with Intel’s view that the PC (total addressable market) will grow year-over-year in 2022,” Chan said. “We have seen inventory build-up for Chromebooks and gaming desktops already, and we believe supply will catch up to demand by early 4Q21 for PC notebooks as well.”

Analyst Chris Caso at Raymond James said there could also be longer-term trouble in Intel’s data center business, where it predicts growth this quarter despite rival Advanced Micro Devices Inc (AMD) having a faster chip on the market.

“We agree that capacity constraints at AMD are likely to check further significant near-term share gains – but it’s just a matter of time before AMD gets access to more capacity, AMD‘s product cycle next year will be a catalyst, and the delay of Intel’s Sapphire Rapids (data center processor chip) doesn’t help,” Caso wrote in a note.

Still, Intel’s raised forecast chimes in with a bullish outlook given by its bigger foundry rival Taiwan Semiconductor Manufacturing Co (TSMC), which expects strong sales growth in the current quarter, boosted by solid demand from smartphones, high-performance PCs and autos.

Auto industry executives also continue to suggest that the squeeze in semiconductor supply, also spurred by a boom in car sales this year, will stretch into next year.

Other economists and industry executives agree, and say that even if the shortage for car producers abates, other manufacturers will suffer.

For now, investors likely need to wait until next week for more clarity, with AMD, Qualcomm Inc, Samsung Electronics and SK Hynix all reporting results.

Combined with Intel, AMD‘s results should give a comprehensive view of the PC and data center markets when the company updates its outlook for the full year.

Qualcomm traditionally only forecasts one quarter in advance, but the company’s dominant position in mobile phones means that investors often read its third-quarter forecast as a proxy for fall smartphone launches, including Apple Inc’s closely watched iPhone.