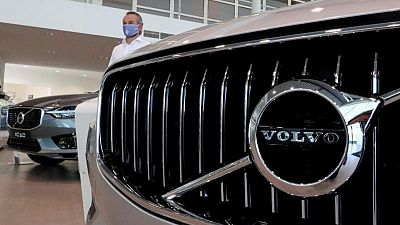 STOCKHOLM -Volvo Cars reported a return to profit in the first half as demand for electric cars pushed earnings above pre-pandemic levels, putting the carmaker on a firmer footing as it considers a possible IPO this year.

Sweden-based Volvo, owned by China’s Geely Holding, said on Friday it made a first-half profit of 13.24 billion Swedish crowns ($1.52 billion), more than double its profit of 5.52 billion crowns in the corresponding period of 2019, before the coronavirus struck.

Like several other automakers Volvo has been forced to cut production due to global shortages of semiconductors, but it said a strong market recovery from last year’s plunge during the pandemic helped first-half revenue rise by 26% to 141 billion crowns.

“The pandemic effect, when it comes to our business, we don’t see it anymore,” Chief Executive Håkan Samuelsson told Reuters.

“All our employees have not been vaccinated yet, but sales and production are really back to where we were.”

The company, which is eyeing an initial public offering before the end of this year, said all its regions showed solid growth and improved market shares, with chargeable cars representing 25% of total sales.

Samuelsson said the evaluation process ahead of a potential IPO was progressing according to plan, adding the firm was still considering listing on the Stockholm stock exchange in the second half of 2021.

“The company stands stronger than ever and we are in the midst of a very substantial transformation… It has to be financed and access to the stock market is of course positive then,” Samuelsson said.

Volvo Cars had been heavily affected at the start of the pandemic, plunging to a 989 million loss in the first half of 2020.

The company on Friday kept its second-half outlook for flat sales and revenue growth year on year, “unless supply of semiconductors improves”. It said earlier this month that first-half sales rose 41% to 380,757 cars.

The Gothenburg-based firm plans to become a fully electric car maker by 2030, sell 600,000 battery electric vehicles at mid-decade, and build a European battery gigafactory in 2026.