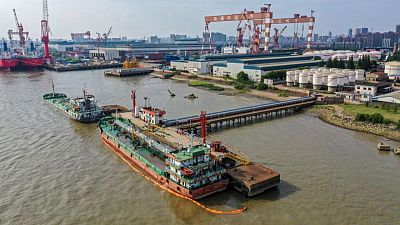 NEWYORK -Oil prices edged higher on Friday and for the week after a strong recovery from Monday’s steep slide, underpinned by expectations that supply will remain tight through the year.

The price of oil and other riskier assets tumbled at the start of the week on concern over the impact on the economy and crude demand from surging cases of the COVID-19 Delta variant in the United States, Britain, Japan and elsewhere.

For the week, Brent gained 0.7% after declining for three consecutive weeks, while WTI rose 0.4% after falling for two weeks.

Both benchmarks slumped about 7% on Monday but pared those losses, with investors expecting demand to stay strong and the market to receive support from falling oil stockpiles and rising vaccination rates.

“The demand concerns proved to be exaggerated, which is why oil prices have since recovered. Despite the expansion in oil supply, the oil market will remain slightly undersupplied until the end of the year,” Commerzbank said in a note.

Demand growth is expected to outpace supply after Sunday’s deal between the Organization of the Petroleum Exporting Countries (OPEC) and allies, collectively known as OPEC+, to add back 400,000 barrels per day (bpd) each month from August.

ANZ Research analysts said in a report that the market was starting to sense the OPEC+ increase will not be enough to keep the market balanced and inventories in the United States and across OECD countries would continue to fall.

U.S. oil rigs rose seven to 387 this week, their highest since April 2020, energy services firm Baker Hughes Co said. But the recovery in drilling has been modest as producers favor spending austerity.[RIG/U]

“We still think the OPEC+ driven dip in crude and distillate prices is a buying opportunity and project Brent will hit $100 a barrel next year, with distillates tagging along for the ride,” Bank of America said in a note.