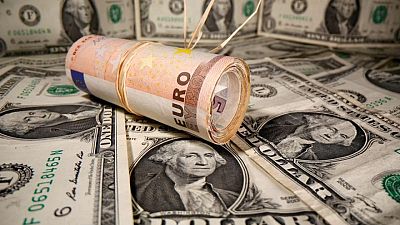 NEWYORK – The U.S. dollar on Friday notched a second week of gains, after a few volatile days when currencies moved with shifting risk appetite, as the market shifted focus to next week’s Federal Reserve meeting.

Some analysts wondered, though, whether the dollar’s recent rally might be losing momentum.

The dollar index, which measures the greenback against a basket of six major currencies, was slightly higher on the day at 92.873. For the week, it was up 0.1%, after rising 0.6% previously.

But that was off a 3-1/2-month high of 93.194 hit on Wednesday, bolstered by strong Wall Street earnings that helped investors regain some confidence in the midst of worries that the Delta coronavirus variant could derail the global recovery.

Risk appetite remained high on Friday, with the rise in U.S. stocks, the sell-off in Treasuries, gains in most commodity currencies, and the greenback coming off its peaks.

“Medium-term oscillators and momentum are in sync on the upside suggesting potential higher highs to come, such as 94.30-94.72 (on the dollar index),” said Dave Rosenberg, chief economist and strategist at Rosenberg Research.

“Overall, the dollar(index) leans toward further upside which could add to recent pressure in commodity prices and other currencies. Support is at 92.00-91.50,” said Rosenberg.

U.S. dollar positioning among short-term investors in the week ended July 20 has flipped to net longs for the first time since March 2020.

Erik Nelson, macro strategist, at Wells Fargo Securities in New York, however, was not convinced the dollar could hold its gains in the coming weeks given the decline in U.S. yields.

“The dollar looks tired especially after the rally of the last few weeks,” he said. “It seems to be running out of steam both from a fundamental and technical perspective.”

Since the beginning of July, U.S. benchmark 10-year Treasury yields have lost 18 basis points, their largest monthly fall since March 2020. The dollar typically moves in tandem with U.S. yields.

Nelson also believes the Fed is going to be a laggard among central banks in normalizing monetary policy.

Investors’ next major focus is the Fed’s two-day policy meeting next week. Since the June 16 meeting, when Fed officials dropped a reference to the coronavirus as a weight on the economy, cases have risen.

Many economists still expect the meeting to advance discussions for a tapering of stimulus.

Meanwhile, the euro was flat at $1.1775, showing little reaction to the purchasing manager surveys coming out of France, Germany and the euro zone as a whole.

Euro zone business activity expanded at its fastest monthly pace in over two decades in July as the loosening of more COVID-19 restrictions gave a boost to services, but fears of another wave of infections hit business confidence.