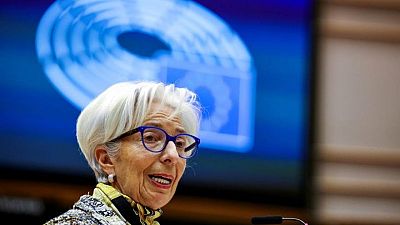 FRANKFURT – European Central Bank President Christine Lagarde tamed the biggest rebellion of her tenure this week through compromise, persuasion, attrition – and a bit of German help, six sources with direct knowledge of the discussion said.

When the dust settled, only two out of 25 policymakers, the German and Belgian central bank governors, objected to the bank’s new guidance on interest rates, which essentially promises unchanged or lower rates into the second half of the decade.

But that outcome masks deep divisions, the sources said.

Nearly half the Governing Council voiced various reservations or objections about the bank’s original guidance proposal, which made a stronger reference to overshooting the inflation target, several sources said. It took two drafting rounds during the meeting to get most dissenters on board.

“The first proposal would have still gotten a majority but just barely,” one of the sources said. “That’s far from consensus.”

This was an unusual situation for policymakers. ECB board proposals are rarely changed during policy meetings and most decisions are supported either through consensus or overwhelming majorities. Plus, the guidance had been discussed by policymakers several weeks earlier, so some changes had already been made prior to Thursday.

The biggest disagreement among policymakers in recent memory happened in September 2019 when a third of the Governing Council opposed then ECB chief Mario Draghi’s proposal for new bond purchases, just months before he handed over to Lagarde.

“This is not on the magnitude of September 2019, to be sure, but it’s a signal that the discussion about bond purchases later this year will be very, very difficult,” another source said.

The sources added that Lagarde won over several people by making changes to the text and several of them praised Lagarde’s political skill in getting broad support in the end.

A reference to getting inflation to “at least” 2% was dropped to ease concerns that the ECB would deliberately aim to overshoot its target, a particular worry for inflation wary Germans.

ECB board member Isabel Schnabel, a powerful German voice on the Governing Council, was among the early sceptics but agreed to support the proposal after the second drafting round, declaring she could accept the changes, three of the sources said.

This appeared to convince several holdouts to join the majority and drop their objections, the sources added.

Indeed, Bundesbank chief Jens Weidmann was one of the two holdouts on Thursday so the two Germans split their vote.

Other dissenters were won over when they agreed that the new guidance would be specifically about interest rates and there would be no new reference about the ECB‘s plans for asset purchases, a discussion likely to be had in the autumn.

“Credibility was also an issue here. If you just keep saying no to draft after draft, people will not take you seriously so a few people I think just gave in,” one of the sources said.

Still, the sources said the difficult discussion on Thursday foreshadows tense meetings over the autumn, when policymakers have to decide on whether to wind down emergency stimulus and ramp up other support schemes.

Peace may also be transitory as Lagarde still used the “at least” 2% phrase in her news conference and took a decisively more dovish tone than expressed by the Governing Council, irking several policymakers, the sources added.

“I think Lagarde did well,” a fourth source said. “Divisions at the end of Draghi’s term were wider and she handled it better.”