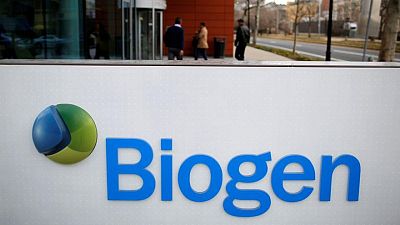 By Manas Mishra and Michael Erman

-Biogen Inc on Thursday said getting hospitals and clinics to use its new Alzheimer’s disease drug Aduhelm and insurers to reimburse it has been slower than it expected, as controversy mounts over the U.S. Food and Drug Administration’s approval process for the treatment.

The Cambridge, Massachusetts-based drugmaker’s top scientist also defended the science behind the approval as well as the company’s interactions with U.S. regulators before the FDA‘s June 7 action https://www.reuters.com/business/healthcare-pharmaceuticals/us-fda-set-rule-controversial-biogen-alzheimers-drug-2021-06-07.

The FDA‘s acting commissioner, Janet Woodcock, has asked the Department of Health and Human Services’ internal watchdog office to investigate https://www.reuters.com/business/healthcare-pharmaceuticals/fda-calls-federal-investigation-into-approval-biogens-alzheimers-drug-2021-07-09 whether talks between Biogen and the agency were consistent with the regulator’s policies.

Aduhelm, administered through an infusion, was approved despite one of its two large-scale clinical trials failing to show a benefit to patients. The approval was based on evidence that Aduhelm can reduce brain plaques, a likely contributor to Alzheimer’s disease, rather than evidence demonstrating that it slows progression of the lethal mind-wasting disease.

Biogen’s head of research and development, Alfred Sandrock, said in a conference call with investors that he believes that ongoing studies being conducted by the company, including one required by the FDA after the approval, would show that reducing these plaques could help slow cognitive decline associated with the disease.

Some prominent doctors, hospitals and health insurers have criticized the FDA‘s approval and said they will not offer the drug, including the Cleveland Clinic and New York’s Mount Sinai Health System.

“A few centers have indicated that they will not provide access to Aduhelm for now. Now remember though, many of these physicians can still prescribe the drug, and they have asked for support to find alternative sites where they can infuse their patients,” Alisha Alaimo, president of Biogen US, said on the call.

Biogen had previously said 900 medical centers would be ready to administer the drug shortly after its launch. So far, 35% of those sites have either completed a review and approved it for use or indicated they will not need a review of the drug.

“Overall, it’s a bit slower than what we assumed, but we are making tremendous progress with some positives and some headwinds,” Chief Executive Michel Vounatsos said.

Stifel analyst Paul Matteis said some doctors or medical centers may be hesitant to build inventory considering they will not know how they will be reimbursed unless Medicare sets a standardized policy for coverage of the drug.

Medicare, the government healthcare program for people over age 65, this month launched a nine-month process to formulate standardized national coverage terms for Aduhelm. For now, claims are being handled by Medicare’s regional offices.

Medicare held its first public hearing on the topic on Thursday.

“I’m concerned that patients who may benefit will not have access to treatment during the nine months prior to the NCD (national coverage decision) and may not be eligible for treatment later,” Salloway added.

Biogen said it expects modest revenue from Aduhelm this year and to ramp up thereafter, adding that it is seeing “strong indications of very high initial patient interest as well as increased referrals.”

The drug brought in revenue of $2 million in the first few weeks since its approval, below expectations of $3.23 million. A “big chunk” of that revenue so far reflects product that had been shipped to customers as inventory and had not yet been administered to patients, Vounatsos said.

In an open letter https://investors.biogen.com/news-releases/news-release-details/open-letter-alzheimers-disease-community-our-head-research-and, Sandrock said the drug’s approval process “has been the subject of extensive misinformation and misunderstanding.”

“It is normal for scientists and clinicians to discuss data from experiments and clinical trials, to debate, and to disagree, on the interpretation of data,” Sandrock wrote.