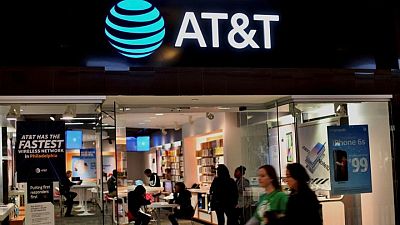 By Sheila Dang and Eva Mathews

-AT&T Inc on Thursday raised its full-year financial forecast as the telecoms company emerged from the pandemic with more wireless and internet customers, and beat analyst estimates for phone subscribers and revenue in the second quarter.

The results come as AT&T is unwinding its expensive media investments to focus on its original business of providing phone and internet services.

Ahead of closing a deal to combine its media content with Discovery, AT&T said WarnerMedia continued to attract more customers to streaming service HBO Max and notched higher revenue as live sports and televised events resumed from the pandemic.

The company added 789,000 net new phone subscribers who pay a monthly bill during the quarter ended June 30, blowing past Wall Street estimates of 278,000 new subscribers, according to data from research firm FactSet.

WarnerMedia added 2.8 million U.S. subscribers for its premium channel HBO and streaming platform HBO Max during the quarter, thanks to new movies like Lin-Manuel Miranda’s “In the Heights” and “Mortal Kombat,” which is based on the popular video game.

“The market is expanding based on consumer spending … but you have to deliver for customers day in and day out,” he said.

Kilar added that HBO Max subscriber growth in Latin America is going to exceed the absolute number of subscriber additions in the U.S. market over the back half of this year and that he “wouldn’t be surprised” if that trend persists into 2022.

The company’s Warner Bros. studio is producing over ten motion pictures that will be available exclusively on HBO Max on “day one” in 2022, Kilar said.

The company said during a conference call with analysts that it would delay launching HBO Max in some European markets until early 2022 in order to focus on its early success in Latin America.

AT&T raised its forecast for global HBO Max subscribers to between 70 million and 73 million by the end of the year. It previously expected 67 million to 70 million subscribers.

Still, AT&T’s move to exit the entertainment business reflects the enormous costs and challenges to compete in a crowded streaming video industry.

The Dallas-based company said its deal to sell a minority stake in DirecTV, its struggling satellite TV brand that continued to shed customers during the quarter, to buyout firm TPG Capital is expected to close within the next few weeks.

AT&T Chief Executive John Stankey said the company’s commitment to WarnerMedia and DirecTV have remained the same to set the businesses up for success.

“We want to hit a strong exit velocity for both of these businesses, at which point the combination with the right partner only expands their respective opportunities for success,” he said during the conference call.

If the deal to sell a piece of DirecTV closes in a few weeks, total revenue will be lowered by $9 billion for the remainder of the year, the company said.

On Wednesday, the company announced it would sell Vrio Corp, its DirecTV business unit in Latin America, to Argentina-based investment group Grupo Werthein after taking a $4.6 billion impairment charge.

AT&T added 246,000 net new fiber internet subscribers during the quarter, up from 225,000 added in the year-ago quarter, as the company has made it a top business priority to serve more households with high-speed internet through fiber optic cables.

Total revenue at AT&T rose 7.6% to $44 billion, beating analysts’ average estimate of $42.67 billion, according to IBES data from Refinitiv.

Excluding impacts from the DirecTV and TPG deal, AT&T now expects 2021 revenue growth in the 2% to 3% range and adjusted earnings per share to rise in the low- to mid-single digits.

The company had previously guided revenue growth in the 1% range and adjusted earnings per share to be stable with the previous year.

Shares of AT&T were flat in morning trading.