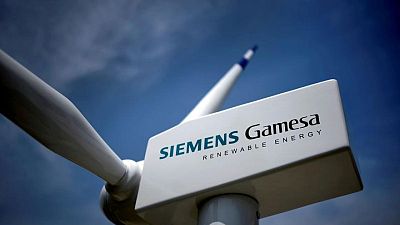 FRANKFURT – Siemens Gamesa’s profit warning last week served as a painful reminder for Christian Bruch, CEO of parent Siemens Energy, that there’s a big difference between owning a majority stake in an asset and having full control.

Siemens Energy holds 67% in Spanish-listed Siemens Gamesa, the world’s largest maker of offshore wind turbines, a stake it was handed by former parent Siemens as part of a spin-off last year.

But that stake gives Bruch relatively little in terms of influence, which has become an issue as problems at Siemens Gamesa’s onshore business have pushed Siemens Energy shares to eight-month lows.

That’s why Siemens Energy is carefully exploring ways to gain full control, two people familiar with the matter said, to end its role as a bystander unable to make changes.

Overall, it has four representatives on Siemens Gamesa’s 12-member board of directors. But only two of those are taken by Siemens Energy management board members – finance chief Maria Ferraro and Tim Oliver Holt.

And while it can theoretically block certain decisions at annual general meetings, it barely has any influence on day-to-day operations, which has drawn the ire of Bruch, who is known for swiftly addressing operational issues when they arise.

In a sign of just how distant the relationship is, Siemens Energy only learnt about the full scale of Siemens Gamesa’s operational problems at its onshore unit on the day they were made public, the people said.

“It’s certainly not an ideal situation but fixing it will take a while,” one of the people said.

Siemens Energy could launch an offer for the third of Siemens Gamesa it does not already own, a 33% stake that is currently valued at about 5 billion euros ($5.9 billion) and held by institutional investors, funds and retail shareholders.

But that’s a hefty price tag for full control and stretching Siemens Energy’s balance sheet might not play well with its owners, including Siemens, which still holds a direct stake of 35% and 5% indirectly via its pension fund, the people said.

Issuing shares might be a more cash-preserving way to launch a bid but JP Morgan analysts last week said that Siemens Energy’s own share price was so low that going down that path, too, would be “painful for the current shareholders”.

A third option would be to wait for Siemens Gamesa’s shares, already down a third this year, to fall further so a takeover bid gets cheaper.

“In the event the share price continues to languish or deteriorates further, it would make a takeover very attractive,” Bernstein analysts wrote.

Since the spin-off in September, Bruch has made structural changes at Siemens Energy’s other, fully-owned, division, which makes gas-turbines and services power plants, most notably announcing plans to cut 7,800 jobs in February.

It is therefore unsurprising that the 51-year-old former Linde manager might be growing impatient over the pace of reform at Siemens Gamesa, which has been led by industry veteran Andreas Nauen since June 2020, the people said.

When asked about the ownership issue in May, Bruch said that while it was too early to talk about a full takeover, it might become an issue at some point.

Investors will pay close attention to his comments on the matter on Aug. 4, when Siemens Energy publishes third-quarter results.