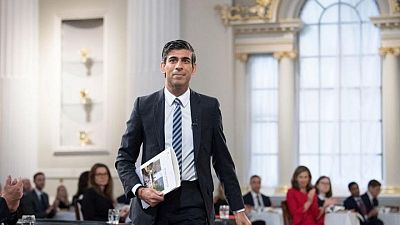 LONDON – British finance minister Rishi Sunak is likely to have 30 billion pounds ($41 billion) of headroom for extra spending or tax cuts this year compared with budget forecasts made in March, but his longer-term flexibility is limited, a think tank said.

The Institute for Fiscal Studies said Britain’s economy was recovering faster from the COVID pandemic than government forecasts had predicted in March, helping to reduce some of the surge in borrowing Sunak ordered to soften the crisis.

But long-term damage to the economy caused by the pandemic meant output was likely to be 3% smaller by the middle of the decade than had been expected before COVID.

“Our forecasts suggest the chancellor has almost no additional wiggle room for permanent spending giveaways if he is to remain on course to deliver current budget balance,” IFS economist Isabel Stockton said.

Britain’s government borrowed 299 billion pounds or 14.3% of gross domestic product during the 12 months to March 2021, the most since World War Two.

In March the Office for Budget Responsibility forecast that borrowing in the 2021/22 financial year would fall to 234 billion pounds, but the IFS predicted it would drop further to 203 billion pounds.

At 9.3% of gross domestic product, this would still be the third-highest borrowing since World War Two, but would give Sunak some extra room to spend more this year if he wished.

By contrast, a longer-term forecast – done jointly by the IFS and economists at U.S. bank Citi – showed little difference to OBR forecasts that pointed to a balanced budget, excluding investment spending, by 2025.

The OBR forecasts implied around 17 billion pounds of cuts to public spending by 2025 and no long-term increase in spending on services such as health and education which might be needed due to COVID, the IFS said.

Tax as a share of GDP is on course to rise to its highest sustained level since 1950, the IFS added.

Sunak plans a higher tax rate for corporations from 2023 and he is also considering raising national insurance contributions – a tax on wages paid by adults below the state pension age – to fund social care for the elderly, according to the Sun newspaper https://www.thesun.co.uk/news/politics/15636214/national-insurance-hike-to-pay-for-social-care.

Currently older people in England with assets of more than 23,250 pounds are expected to pay for non-medical care in full.