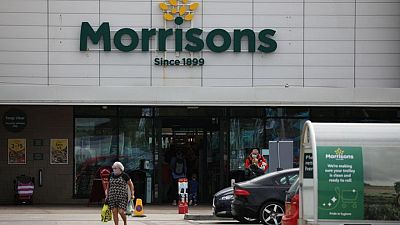 LONDON -The prospect of a bid battle for Morrisons lessened on Tuesday after one of the private equity group’s stalking the British supermarket group said it would not pursue a solo offer.

U.S. group Apollo Global Management said it was in talks to join the consortium led by Fortress Investment Group that last month agreed a 6.3 billion pound ($8.6 billion) takeover of Morrisons.

Apollo, whose investments include Watches of Switzerland, TMT group Endemol Shine and bookmaker Ladbrokes Coral, said it did not intend to make an offer for Morrisons other than as part of the Fortress-led consortium.

Earlier this month Apollo had said it was evaluating its own bid.

The offer from Fortress, along with Canada Pension Plan Investment Board and Koch Real Estate Investments, exceeded a 5.52 billion pound unsolicited proposal from Clayton, Dubilier & Rice (CD&R), which Morrisons rejected in June.

CD&R could still come back with a higher offer, while analysts have speculated that Amazon, which has a partnership deal with Morrisons, could also enter the fray.

Fortress is owned by Japan’s SoftBank .

Apollo said it had noted Fortress’s intentions regarding the Morrisons business and all its stakeholders.

“Should these discussions lead to any transaction, Apollo would be fully supportive of Fortress’s stated intentions regarding Morrisons,” Apollo said.

A circular from Morrisons detailing Fortress’ offer must go to shareholders within 28 days of July 3.

The circular will contain a notice of a court meeting and a general meeting for shareholders to vote on the proposal.

When it has a date for the shareholder meetings, the Takeover Panel will then set a deadline by which CD&R needs to clarify its intentions.