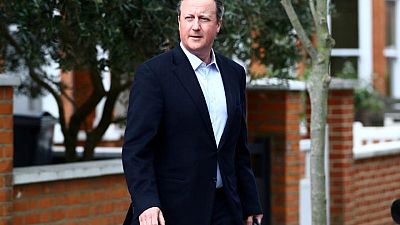 Cameron lobbied ministers and senior officials repeatedly over access for Greensill Capital to the government’s pandemic funding schemes during a four-month period in 2020.

Although his efforts did not result in a change in government policy and Greensill filed for insolvency protection in March, Cameron’s involvement has raised wider questions about how much influence lobbyists and former politicians can have.

“The committee concludes that Mr Cameron’s use of less formal means to lobby government showed a significant lack of judgement on his part, especially as his ability to use an informal approach was aided by his previous position of Prime Minister,” they said in a statement accompanying a report on the issue.

Cameron previously defended his use of WhatsApp and SMS messages to contact people he used to work with when prime minister, saying it was justified given the severity of the COVID-19 crisis. He also said different rules could be used in the future.

The committee also examined what lessons could be learned around supply chain finance.

They did not call for making supply chain finance in general a regulated activity but said the mechanism used by Greensill, known as the ‘appointed representatives regime’, should be tightened up to reduce “opportunities for abuse”.

The regime allowed Greensill to deal with investments by acting as a representative of Mirabella Advisers LLP, which was authorised by UK regulators under a system that dates to the 1980s and intended for small-scale activity.

Lawmakers said rules on who can take control of a lender also needed tightening as a “matter of urgency” after Wyelands Bank, which was part of Sanjeev Gupta’s GFG Alliance, was forced by the Bank of England to hand back deposits.

Changes should ensure that the Bank of England has powers to ensure that existing banks “do not fall into the hands of owners who would not be granted a banking licence in their own right”, the report said. BoE Deputy Governor Sam Woods told lawmaker hearings he was already raising this with the finance ministry.