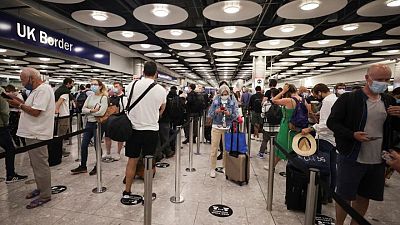 LONDON – Britain’s latest travel rule change hit shares in airlines on Monday, with carriers including easyJet and British Airways-owner IAG losing as much as 6% after a surprise shift in requirements for arrivals from France.

The UK travel industry has for months criticised the government’s strict quarantine rules and last minute changes to country classifications which has resulted in a roller-coaster of booking surges followed by mass cancellations.

Britain said on Friday that it was scrapping a planned easing of coronavirus rules for fully-vaccinated UK arrivals into England from France. Rising cases of one coronavirus variant in France meant that arrivals from there would no longer be exempt from quarantine.

The surprise raised concerns about further changes, discouraging people from booking, just when fully-vaccinated people are able to travel to most of Europe without needing to quarantine on return.

Shares in easyJet, whose biggest market is Britain, were down almost 6% in midday trading, while IAG was down 4%, and TUI and Jet2 down more than 3%.

The stocks have all lost around 20% of their value over the last three months as new variants and ongoing travel rules and restrictions have crushed hopes for a bumper summer. They are all trading well below where they were prior to the pandemic.

“Fears are that Spain and Greece could be similarly treated,” Goodbody analysts said in a note.

Spain was Britain’s no.1 destination before the pandemic, with France in no.2 position. Greece is another popular destination for British holidaymakers.

Britain’s travel recovery lags that of other European countries. Eurocontrol data showed that on July 12, UK flight numbers were 65% down on the same day in 2019, behind Spain, Germany, France and Italy which were down between 30% and 45%.