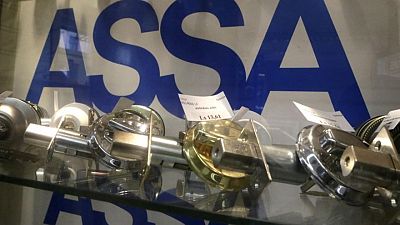 STOCKHOLM – Sweden’s Assa Abloy, the world’s biggest lockmaker, beat expectations with a 71% jump in second-quarter operating profit on Monday, saying demand picked up in many of its markets even as travel-related sectors, such as hotels, still lagged.

The company – whose products range from security doors and automated entrance solutions to electronic and mechanical locks under a wide range of brands such as Yale, said sales returned to or exceeded pre-pandemic levels in three divisions including its biggest, Entrance Systems.

The group’s operating profit was 3.59 billion crowns ($413.8 million) against 2.10 billion a year earlier and a mean forecast of 3.47 billion in a Refinitiv poll of analysts.

Sales before acquisitions jumped a record 23% from a year ago, when sales slumped due to the pandemic.

“As we look forward, we expect mobility to increase and demand in many markets and segments to normalize, apart from the travel-related verticals where restrictions are still delaying our recovery,” Chief Executive Nico Delvaux said in a statement.

Assa Abloy said its Global Technologies division grew like-for-like sales by 17% though volumes in travel-related segments, such as hotels, which it supplies with key cards, in-room safes and electronic door locks, still remained lower than before the pandemic.

The company, whose rivals include Allegion and Stanley Black & Decker, said product price increases had largely offset rising raw material costs and it had managed to deal with shortages of some components during the quarter.

Assa Abloy is betting on electronic locks as a key growth driver in future, and said on Monday the pandemic was accelerating the transition towards such products that require less or no touching.

Sales of such locks rose 16% in the quarter, to nearly a third of group sales.