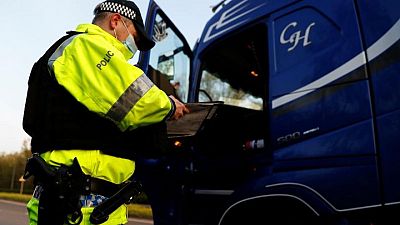 LONDON – British supermarket groups, including Tesco, Sainsbury’s and Asda, said on Sunday they may shift some supply chains from the UK to the European Union unless the future of Britain-Northern Ireland trade is addressed urgently.

Current post-Brexit trading arrangements between Britain and Northern Ireland are governed by the Northern Ireland protocol. This was designed to strike a balance between keeping open the province’s border with EU member Ireland to protect the 1998 Good Friday peace deal, while stopping goods entering the EU’s single market unchecked across that frontier.

The protocol keeps Northern Ireland inside the EU single market for goods, but this requires controls on goods arriving from mainland Britain. A grace period ends in October.

The CEOs of the three grocers, along with the bosses of Marks & Spencer, the Co-operative Group and Iceland, wrote in a letter to Britain’s Brexit minister David Frost and European Commission vice president Maros Sefcovic that from October, unless a solution is found, they will face increased cost and complexity when moving goods from Britain to Northern Ireland.

This would be because of increased checks at Northern Irish ports, additional paperwork requirements, and the need for Export Health Certificates on products of animal origin.

“The challenges this will create in sourcing could force many retailers to move supply chains from GB to the EU,” they said.

Last month, the EU agreed to a ceasefire with the UK in a dispute dubbed the “sausage war” by extending a grace period for shipments of certain meat products from Britain to Northern Ireland.

“Much more needs to be done before the end of September if there is not to be significant disruption to supply and an increase in cost for Northern Ireland consumers,” the CEOs said.

They want talks with the UK government and the EU.

“Without swift, decisive, and cooperative movement on this issue there will be disruption,” the CEOs said.

They said possible solutions include a veterinary agreement, a wider Sanitary and Phytosanitary (SPS) agreement, a facilitated movement scheme or a Trusted Trader scheme.

The letter was coordinated by industry lobby group the British Retail Consortium.