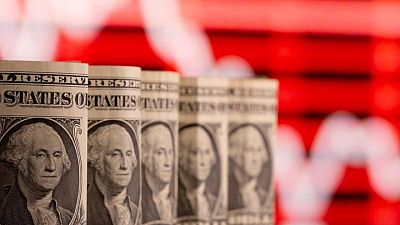 NEWYORK -The dollar edged higher on Friday, logging its largest weekly gain in a month, after upbeat retail sales data boosted expectations that economic growth accelerated in the second quarter.

U.S. retail sales unexpectedly increased in June as demand for goods remained strong even as spending was shifting back to services.

A survey that showed U.S. consumer sentiment fell sharply and unexpectedly in early July to the lowest level in five months, as inflation worries dented confidence in the economic recovery, did little to dent the dollar’s stronger tone.

Solid U.S. data and a shift in interest rate expectations after the Federal Reserve flagged in June sooner-than-expected hikes in 2023 have helped lift the dollar in recent weeks and made investors nervous about shorting it.

Friday’s gains for the dollar came despite Fed Chair Jerome Powell reiterating on Thursday that rising inflation was likely to be transitory and that the U.S. central bank would continue to support the economy.

“A backdrop of rising inflation, falling unemployment and a resilient consumer makes a compelling case for the Fed to unwind stimulus,” Manimbo said.

The New Zealand dollar gained 0.44% after data showed New Zealand’s consumer prices rose far faster than expected, prompting some in the market to bet on a rate hike as soon as August..

Sterling fell against the dollar, on pace for its worst week in a month, as investors sought safety in the greenback amid concerns over rising COVID-19 cases globally.

The Canadian dollar climbed 0.1% on Friday, helped by upbeat domestic wholesale trade data, a day after touching a near 3-month low against its U.S. counterpart.

Cryptocurrencies found support after recent turbulence, with bitcoin about flat on the day at $32,027.33.