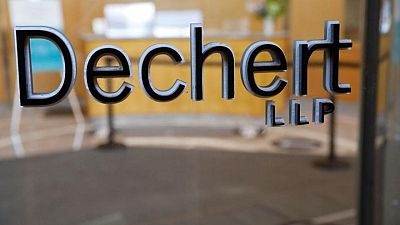 -A Missouri businessman can sue Dechert LLP over his claim that the international law firm helped mastermind the hack and leak of his emails, a British court ruled on Friday.

The unusual lawsuit – which pits aviation mogul Farhad Azima against Philadelphia-based Dechert – centers on claims that the firm and its former London partner Neil Gerrard had Indian hackers steal and disseminate Azima’s emails.

Dechert and Gerrard – as well as executive James Buchanan and private investigator Stuart Page, who are also being sued – had initially resisted https://www.reuters.com/legal/litigation/dechert-may-face-uk-lawsuit-over-indian-hacking-claim-2021-07-12 being added as defendants to pre-existing litigation against Dechert’s client, the Ras Al Khaimah Investment Authority (RAKIA), a Gulf-based investment fund which Azima has long accused of hacking him.

Dechert, Gerrard, Buchanan, and Page dropped their opposition at the last minute, a lawyer for Azima told the court.

“The additional defendants all now consent to joinder,” said Tim Lord of Brick Court Chambers, according to a transcript https://mediaserver.responsesource.com/mediabank/33686/RvFDay2.pdf of the proceedings.

Messages seeking comment from Page and Buchanan were not immediately returned.

Allegations of hacking against law firms are highly unusual, an academic previously https://www.reuters.com/legal/litigation/dechert-may-face-uk-lawsuit-over-indian-hacking-claim-2021-07-12 told Reuters. In court on Friday, Lord said the case “is getting more and more unique.”

The case may shed further light on the use of Indian mercenary hackers, which Reuters reported https://www.reuters.com/article/us-india-cyber-mercenaries-exclusive/exclusive-obscure-indian-cyber-firm-spied-on-politicians-investors-worldwide-idUSKBN23G1GQ on last year.