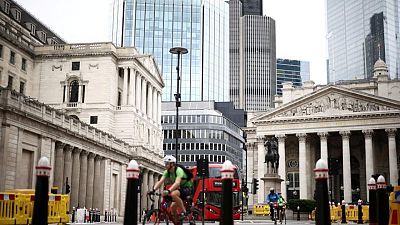 LONDON -Two top Bank of England officials surprised investors this week by saying the time might be nearing for the British central bank to rein in the huge stimulus programme it has used to steer the economy through the coronavirus crisis.

With activity bouncing back strongly, and inflation rising faster than expected, Deputy Governor Dave Ramsden said on Wednesday that the BoE might start to consider tightening monetary policy sooner than he previously thought.

On Friday, a group of lawmakers told the BoE to explain why it was not winding down its stimulus.

But the way ahead is far from clear.

The BoE does not know how many jobs will be lost when the government ends its wage subsidies programme in September, so MPC members remain cautious about removing stimulus.

And the central bank is acutely aware of how talk by the U.S. Federal Reserve of merely slowing bond purchases in 2013 caused a “taper tantrum” which pushed up borrowing costs in financial markets sharply and forced the Fed to stress it was in no rush.

Below is a summary of the ways the BoE could choose to take its foot off the stimulus accelerator.

The BoE decided in November to buy a further 150 billion pounds of British government bonds. That proved to be just a few days before the announcement of a major breakthrough on COVID-19 vaccine development that suddenly raised recovery hopes.

The BoE still has about another 60 billion pounds’ worth of gilts to buy until it completes the programme.

MPC member Saunders said curtailing the programme would be discussed at the next meetings of the committee, which is due to announce its latest policy decisions on Aug. 5, and that it could be curtailed in the next month or two.

Economists at bank HSBC said they did not think a majority of the MPC‘s members would vote to reduce the programme in August although it was likely to slow the pace of buying to make the programme last until the end of 2021 as planned.

Another option for the BoE is to complete its bond-purchase programme and then let the size of its stockpile run down by not reinvesting the receipts from maturing debt in more bonds.

Deputy Governor Ramsden said this week that the BoE could decide to reinvest none of the maturing debt or do a partial reinvestment.

The BoE might similarly allow its 20 billion pound corporate bond portfolio, which has already hit its target size, to run down.

A faster way to put the brakes on the economy would be for the BoE to sell some of the bonds it has amassed.

Given the size of the BoE’s presence in the bond market – its holdings of British government bonds, or gilts, now amount to 40% of Britain’s annual economic output – outright sales of gilts would be a big step. It is considered an option for further ahead in the economic recovery, probably once the BoE has begun to raise interest rates.

The BoE cut Bank Rate to an all-time low of 0.1% in March 2020 at the onset of the coronavirus crisis.

As recently as early this year, before the recovery took off, its policymakers were talking about the pros and cons of cutting the benchmark rate below zero for the first time.

Now, with the economy growing quickly, investors are pricing in a rise in Bank Rate to 0.25% by around August of next year.

BoE officials have stressed that when the time comes to raise borrowing costs they expect to move gradually and Bank Rate is likely to remain a long way below the 4-5% levels that were common before the global financial crisis of 2008-09.

The BoE is due to announce later this year how it might sequence rate hikes with moves to reduce the size of its balance sheet. Previously, the BoE has said it would wait until Bank Rate reaches 1.5% before shedding bonds.