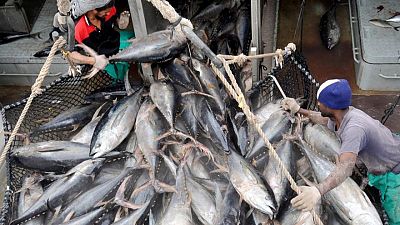 GENEVA -The head of the World Trade Organization on Thursday expressed optimism about clinching a long-awaited deal to stop overfishing, even after some developing states criticised the draft agreement with India calling parts of it “unjust”.

The virtual conference in Geneva – the first meeting of WTO trade ministers since 2017 – was called to advance 20 years of talks aimed at fixing rules to curb harmful subsidies that lead to overfishing amid falling stocks.

The trade body has not reached a global deal in years and Director-General Ngozi Okonjo-Iweala, who took office in March, aims to reach agreement by year-end in what will be a key test for its credibility with members deadlocked on other fronts.

“We couldn’t have wished for a better outcome,” she said at the close of the meeting where more than 100 ministers spoke.

The talks’ chair Santiago Wills, whose commitment to the world’s fish was placed beyond all doubt when he devoted a Valentine’s poem to them last year, was also upbeat: “I believe that the answers today have given us the ingredients to reach a successful conclusion.”

The eight-page draft deal reviewed by ministers lists a range of subsidy bans, with some conditions for exemptions for poorer countries that are yet to be finalised by negotiators.

While some delegations like the EU were positive, several ministers expressed reservations – pointing to a gulf between wealthier countries and some developing states that want to build up their fleets with the help of subsidies.

“Clearly, it will lead to capacity constraints for developing countries, while advanced nations will continue to grant subsidies,” Indian trade minister Piyush Goyal said on one part of the text. “This is unequal, unfair, unjust.”

Pakistan described the draft as “regressive and unbalanced” and the African group, seen by many as losing out from subsidies that allow big industrial fleets to compete in its waters, said that “significant gaps” remained.

One delegate from a wealthy country who asked not to be named described some of the criticisms as “obstructionist”.

Several delegates said India’s strong stance might be about seeking a trade-off in separate WTO negotiations on a patent waiver for COVID-19 drugs that some wealthy countries oppose.

China – the top subsidiser accounting for about 21% of the $35.4 billion in handouts globally according to a 2019 study – appeared to offer one key concession.

In a hint that it might forego at least some exemptions for itself, Commerce Minister Wang Wentao said that they should be “mainly provided for poor and vulnerable artisanal fishers” in developing and least developed countries.

Negotiators got close to a deal at the last WTO ministerial conference in 2017 but the talks collapsed, with some blaming developing countries who sought big exemptions.

Any deal needs all 164 parties to approve it by consensus.

Negotiators will next move to “line-by-line” talks to resolve differences, with the first meeting next week. “If we continue for another 20 years there won’t be any fish left,” said Wills.