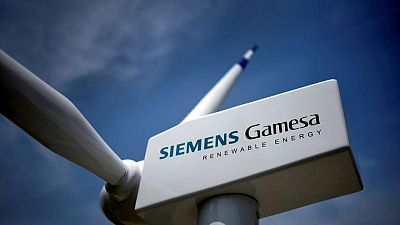 MADRID – Shares in Siemens Gamesa tumbled as much as 17% on Thursday after the wind turbine maker warned of a possible loss due to sharp increases in raw materials prices and product ramp-up costs.

Parent Siemens Energy scrapped its own margin target on Wednesday to factor in the second profit warning from the turbine business in less than three months.

It has been trying to turn around a less profitable onshore division and has already lowered its profit ambitions once this year, citing materials costs and execution delays which have been exacerbated by the coronavirus pandemic.

The company is grappling with higher ramp-up costs for its 5.X onshore wind turbine platform, especially in Brazil, where it complained of supply chain shortfalls and logistical bottlenecks.

Chief Executive Andreas Nauen said he remains optimistic that the company could reach a profit margin of 8-10% but the timing could slip from 2023 to 2024.

“We would like to come back to you once we have gone further with our homework,” he told analysts on a conference call.

In recent months, the company has pushed harder to pass on the rising costs of materials such as steel to its customers, Nauen said.

“Of course, (customers) do not happily discuss that, it’s clear… it’s also clear that in light of the size of the increases it cannot stay with us,” he said.

Siemens Gamesa has now lost almost a third of its market value so far this year, extending losses that began in January with a sector-wide fall in renewable energy stocks from a dizzying peak built up after an initial pandemic slump in 2020.

Siemens Energy was spun off from Siemens AG and listed last year.

(This story was refiled to delete repeated word in the headline)