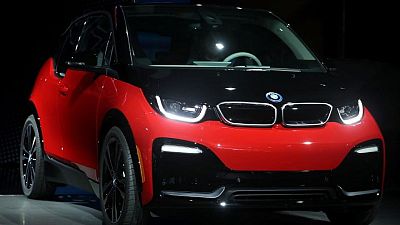 FRANKFURT – Germany’s biggest power network operator TenneT is stepping up a pilot project to study the use of electric vehicle (EV) batteries in helping to stabilise power transmission networks, it said on Wednesday.

Some 20 BMW i3 electric cars have been handed over to private customers in a project launched in 2019, and another 30 will be given to commercial fleet users over the next few weeks as part of the expanded study, TenneT said in a statement.

The tests will link the cars with charging infrastructure and electricity grids to promote renewable energy flows and to maintain supply security, it said.

TenneT and BMW are among a wider group of public and private sector partners that will test relevant hardware and software in the three-year endeavour.

Carmakers are increasingly exploring links between EVs and grids as the mass roll-out of EVs gathers pace.

Called “bi-directional load management”, the process means that EVs do not just “fill up” with electricity but are also able to send back power in the other direction when it is not needed by the car.

Owners of rooftop solar panels, for example, could maximise the use of home-produced green power and earn cash from sharing surpluses.

“We are interested in finding new ways of flexibly steering weather-dependent, renewable power production and in that way to take stress of the electricity grid,” said TenneT chief operating officer Tim Meyerjuergens.

TenneT is a key stakeholder in the transition to a carbon-free economy, operating the largest of Germany’s four power transmission networks as well as the grid in the neighbouring Netherlands, where its parent is headquartered.

Keeping frequencies stable is a top objective as Germany keeps installing more volatile wind and solar power, while reliable capacity such as nuclear and coal generation goes offline due to climate and safety regulations.