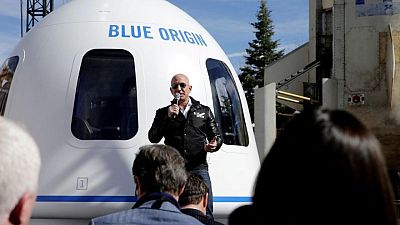 SEATTLE – Jeff Bezos may have been beaten to space by rival Richard Branson, but the billionaire American businessman is poised to make history next week aboard what would be the world’s first unpiloted suborbital flight with an all-civilian crew.

Bezos, the former CEO of Amazon.com Inc, is due to be part of a four-person crew for a planned 11-minute ride to the edge of space on Tuesday inside his company Blue Origin’s New Shepard spacecraft, another milestone in the nascent and potentially lucrative space tourism sector.

He is set to be joined by his brother and private equity executive Mark Bezos, trailblazing octogenarian woman aviator Wally Funk and an as-yet-unidentified person who paid $28 million for a spot aboard the spacecraft, scheduled to launch from a West Texas site.

New Shepard is a 60-foot-tall (18.3-meters-tall) and fully autonomous rocket-and-capsule combo that cannot be piloted from inside the spacecraft. The crew is set to include only civilians and none of Blue Origin’s employees or staff astronauts, three people familiar with the company’s plans told Reuters.

“To see the Earth from space, it changes you, it changes your relationship with this planet, with humanity,” Bezos said in a video last month discussing the flight.

There has never before been a fully autonomous suborbital or orbital flight with an all-civilian crew, Teal Group space industry analyst Marco Caceres said.

Branson, the British billionaire businessman, was aboard his company Virgin Galactic’s rocket plane for its pioneering suborbital flight from New Mexico on Sunday. The Virgin Galactic flight included two pilots, as well as the company’s chief astronaut instructor and its lead operations engineer.

New Shepard lifts off from a standing position on a launch pad, like traditional rocket launches. With Virgin Galactic, a rocket-powered spaceplane was dropped from a carrier plane in mid-air.

Blue Origin’s flight is two decades in the making. Bezos founded the company in 2000. A pilotless craft was a financial strategy adopted by Blue Origin executives years ago.

“It’s simple math,” said one of the people familiar with the company’s thinking. “If you design a system so that you don’t need a pilot or a co-pilot you can have more paying customers.”

A Blue Origin spokesperson confirmed the decision was made for four seats to offer an enhanced customer experience for the first flight.

The decision to skip over Blue Origin’s staff astronauts and technical experts has caused frustration for some company insiders who viewed the first crewed flight as a crucial opportunity to gather data and technical feedback for a program in its infancy, and to evaluate the experience for future paying customers, the sources said.

A seasoned astronaut would provide a calming presence for civilian crew members as New Shepard blasts off at speeds upwards of 2,200 miles (3,540 km) per hour, the sources added.

The crew members will receive two days of training. Blue Origin has assigned two staff members, on the ground, to help the passengers strap in and to provide point-by-point instructions over headsets during the mission.

“It’s kind of like getting on a ride at an amusement park,” Caceres said. “You just trust that everything has been checked out, is in good working order … and you just sit back and enjoy the ride.”

Some industry sources have expressed concerns that passengers – overwhelmed by the experience or in a state of euphoria – could be rattled by routine noises, miss key instructions, pass out or injure themselves floating around the cabin, potentially dangerous scenarios a trained astronaut could respond to.

Funk, 82, was one of 13 women who passed the same rigorous testing as the Mercury Seven male astronauts in NASA‘s 1960s space program but were denied the chance to become astronauts because of their gender.

Proving the safety of space travel is important to developing what Swiss investment bank UBS estimates will be a $3 billion annual tourism market a decade from now.

“One of the main goals of the New Shepard mission is to demonstrate that going to suborbital space is perfectly safe for the average person,” Caceres said. “So there is a benefit to having as many average people on these flights as possible.”