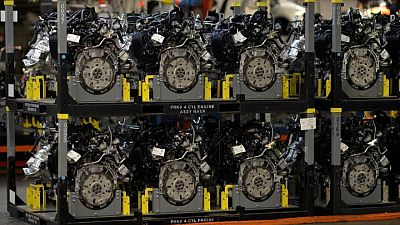 WASHINGTON – U.S. producer prices accelerated in June, leading to the largest annual increase in more than 10-1/2 years, suggesting inflation could remain high as robust demand fueled by the economy’s recovery from the COVID-19 pandemic strains the supply chain.

The report from the Labor Department on Wednesday followed on the heels of news on Tuesday that consumer prices increased by the most in 13 years in June. There are, however, signs that inflation is close to peaking. Underlying producer prices rose at a moderate pace on a monthly basis in June.

Federal Reserve Chair Jerome Powell, in remarks prepared for delivery at a congressional hearing on Wednesday, said “inflation has increased notably and will likely remain elevated in coming months before moderating.” Powell has long maintained that high inflation is transitory, a view shared by most economists and the White House.

The producer price index for final demand increased 1.0% last month after rising 0.8% in May. A 0.8% jump in the cost of services accounted for nearly 60% of the increase in the PPI. Services rose 0.6% in May. Goods prices climbed 1.2% after accelerating 1.5% in the prior month.

In the 12 months through June, the PPI surged 7.3%. That was the biggest year-on-year rise since November 2010 and followed a 6.6% advance in May. Economists polled by Reuters had forecast the PPI would increase 0.6% in June and rise 6.8% on a year-on-year basis.

Higher commodity prices and increased labor costs due to a shortage of willing workers are driving inflation at the factory gate. Very low inventory levels because of supply chain issues are making it easy for producers to pass on the costs to consumers. Sectors at the center of the economy’s reopening have seen large price increases, though there were signs in June that inflation was broadening to other segments.

Stocks on Wall Street rose, with the S&P 500 index hitting a record high as Powell’s comments fueled hopes the Fed would stick to its accommodative monetary policy. The dollar slipped against a basket of currencies. U.S. Treasury yields fell.

The U.S. central bank slashed its benchmark overnight interest rate to near zero last year and is pumping money into the economy through monthly bond purchases. That ultra-easy monetary policy stance, COVID-19 vaccinations and nearly $6 trillion in government relief since the pandemic started in the United States in March 2020 are whipping up demand.

But inflation is likely nearing its peak. Excluding the volatile food, energy and trade services components, producer prices rose 0.5%. The so-called core PPI gained 0.7% in May. In the 12 months through June, the core PPI accelerated 5.5%. That was the largest rise since the government introduced the series in August 2014 and followed a 5.3% increase in May.

“We believe this will be the peak in the pace of wholesale inflation as base effects ease, but ongoing friction between supply and demand will continue to keep prices sticky through 2021 and into 2022,” said Mahir Rasheed, a U.S. economist at Oxford Economics in New York.

A separate report from the Atlanta Fed on Wednesday showed its sticky-price consumer price index, a weighted basket of items that change price relatively slowly, increased 3.5% on an annualized basis in June after soaring 4.5% in May.

The Fed has signaled it could tolerate higher inflation for some time to offset years in which inflation was lodged below its 2% target, a flexible average. The Fed’s preferred inflation measure, the core personal consumption expenditures price index, vaulted 3.4% in May, the largest gain since April 1992.

Last month’s surge in the costs of services was led by a 2.1% surge in trade services, which measure changes in margins received by retailers and wholesalers. Twenty percent of the increase in services was due to margins for automobiles and parts retailing, which rose 10.5%.

There were also gains in the prices of machinery, hardware, building materials and supplies, guestroom rental, professional and commercial equipment and passenger transportation.

Wholesale energy prices increased 2.1%. Food prices climbed 0.8%. Wholesale core goods prices rose 1.0% after gaining 1.1% in May. Though softwood lumber prices fell 0.7%, they were up a record 125.3% from a year ago. Expensive lumber is holding back homebuilding, contributing to rampant house price inflation.

Some of the PPI components, which feed into the core PCE price index, were weak last month. Healthcare costs dipped 0.1% after gaining 0.2% in the prior month. Portfolio management fees fell 0.3% after rising 2.0% in May. But airline tickets rebounded 2.5% after dropping 1.3% in May.

“That should hold back the June PCE inflation data, but even so it looks like the monthly change in core PCE inflation will be strong for June,” said Daniel Silver, an economist at JPMorgan in New York.

With the CPI and PPI data in hand, economists are estimating that the core PCE price index rose 0.4% in June, which would translate to a year-on-year increase of about 3.5%. The data is due to be released at the end of this month.