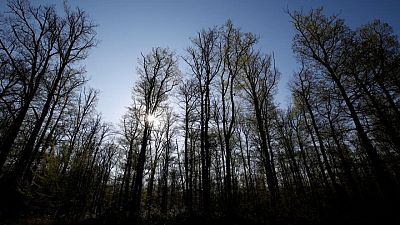 LONDON -The European Commission on Wednesday proposed setting targets for European Union member states to use carbon reservoirs such as forests and grasslands to absorb a cumulative 310 million tonnes of CO2 a year from the atmosphere by 2030.

Experts see the protection and build-up of natural “carbon sinks” as crucial to reaching “net zero” emissions by 2050, the goal scientists say the world must meet to avoid the worst impacts of climate change.

The Commission proposed to implement its overall goal by setting legally binding targets for each EU member state from 2026.

“The Union target of 310 million tonnes CO2 equivalent of net removals will be distributed among the Member States in order to determine binding national targets of minimum net removals to achieve in 2030,” according to the document.

“Thanks to evolutions in land monitoring technologies, there are abundant opportunities to monitor land use changes at low cost and in a timely fashion (e.g. by using approaches based on remote sensing, including from the Copernicus Sentinel satellites or commercially available services),” it added.

A table in the proposal document lists Sweden, Spain, Poland, Italy, France, Germany and Romania as nations with the highest reduction quotas of between around 47 million tonnes CO2 and 26 million tonnes.

Finland, Bulgaria, Slovakia, Croatia, Hungary and Austria are requested to make sure that natural carbon sinks on their territory absorb more than 5 million tonnes a year each.

EU forests, grasslands, croplands and wetlands altogether currently remove a net 268 million tonnes of CO2 equivalent (CO2e) from the atmosphere, according to the Commission. That total factors in the amount of CO2 released when trees were cut down or wildlands burned.

By comparison, the EU emitted a total of roughly 4 billion tonnes of CO2e in that year, from polluters in all sectors of its economy, including energy, transport and manufacturing.

The policy is one of a raft of proposals released on Wednesday, which EU member states will wrangle over in coming months, in a bid to realise the bloc’s promise to slash its net emissions by 55% from 1990 levels by 2030, on the way to “net zero”.

The carbon sink policy is in line with a draft seen by Reuters last week.

The protection of forests as carbon stores also stretches to a ban on sourcing biomass, such as wood pellets for energy production, from primary forests, peatlands and wetlands.

The plan also bans state support for forest biomass for electricity-only plants from 2026.

Carbon-absorbing forests, wetlands and grasslands, known in climate jargon as “natural solutions”, also form the basis of a growing carbon offset market, in which companies and individuals can buy certificates to balance out polluting activities elsewhere.