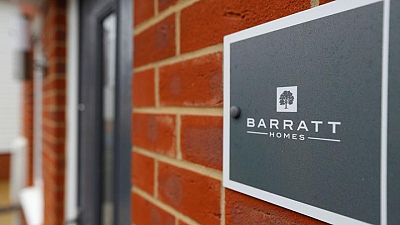 As well as a tax break during the pandemic, cheap loans and demand for larger properties as more people work from home have bolstered prospects for housebuilders.

“Whilst these are still uncertain times, we enter the new financial year in a strong position and remain focussed on our medium-term targets, including delivering 20,000 homes a year,” Chief Executive Officer David Thomas said on Tuesday.

Barratt said it was well-positioned for its new financial year, with total forward sales including joint ventures of 3.47 billion pounds ($4.8 billion) at June 30, above 3.25 million pounds at the same point in 2020 and 2019’s 2.60 million pounds.

Its shares were up around 1% in early trade.

JP Morgan analysts said the sales rate in June suggested a little softening from the strong trading in the second half of the financial year, but noted average selling price trends remained positive. They have a neutral rating on the stock.

Britain’s No.2 housebuilder Persimmon and some mid-sized firms including Redrow and Vistry have also sounded confident recently about market prospects.

Barratt said legacy property costs, including those related to cladding, were expected to be about 81 million pounds, 30 million pounds higher than previous guidance. Like other builders, Barratt has earmarked funds for safety work on its developments after a deadly tower block fire in London in 2017.