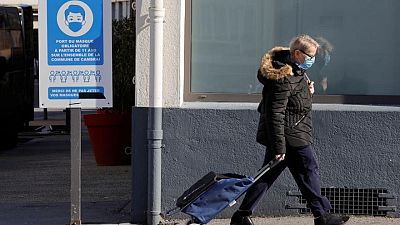 PARIS -French retailers were puzzled on Tuesday over how a new government proposal requiring them to block people not vaccinated against COVID-19 from shopping malls could possibly work out in practice.

Ahead of a meeting with Finance Minister Bruno Le Maire on Wednesday, retailers said that a widening of COVID health pass requirements announced by President Emmanuel Macron on Tuesday was difficult to implement. [nL1N2OP0H0]

In a bid to slow down the spread of the virus, Macron said a health pass would be required from July 21 to enter places of leisure and culture and that from early August it would be required in bars and restaurants, shopping malls, hospitals as well as in planes and long-distance trains and buses.

A health pass would have to show double vaccination against COVID-19, recovery from the illness or a recent negative test.

“The government did not want to make vaccination mandatory for all and puts the onus on private companies,” retail federation FCD chief Jacques Creyssel said on C-News TV.

He said it was hard to imagine how anyone could stop a customer who needed to buy food or medicines.

He added that the industry has a lot of young staff, many of whom are not vaccinated and that given that it takes about one and a half months to get two doses, it was not feasible to get everyone ready by early August.

“We hope the law to be voted on will make clear that public authorities will be in charge of controlling access, because we cannot do this ourselves,” he said.

French Health Minister Olivier Veran later told France 2 television that staff from establishments open to the public would be given until Aug. 30 to be fully vaccinated.

The head of French retailer System U, Dominique Schelcher, said on his Twitter account that putting in place a health pass system at the entrance of a supermarket would raise many issues, such as who is in charge of control, what to do in case of conflict and what to do with non-vaccinated workers.

He also said that the new measure would only impact shopping malls, not small neighbourhood supermarkets.