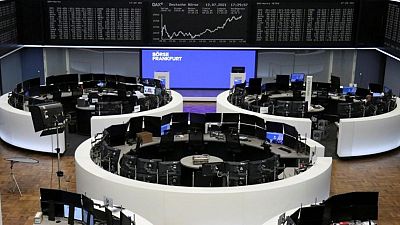 The pan-European STOXX 600 index ended flat after hitting a record high in early trading. Banks, auto and parts and oil and gas sectors were among the biggest decliners, down between 0.5% and 1.2%, while gains in some defensive stocks and technology shares countered losses.

Data showed U.S. consumer prices rose by the most in 13 years last month, while the so-called core CPI marked its largest rise since November 1991. This fanned fears that an overheating economy amid a faster reopening could force the Federal Reserve to pare back its ultra-loose monetary policies sooner than expected.

“We continue to doubt the Fed’s narrative that inflation is ‘transitory’ and instead see the risks that it stays elevated for many more months,” said James Knightley, chief international economist at ING.

European Central Bank President Christine Lagarde said on Tuesday it would not repeat its past mistake of tightening policy too early. ECB Governing Council member Mario Centeno said the bank would risk losing credibility if it did not highlight the “room for manoeuvre” it has given itself on inflation.

British lenders gave back gains made after the Bank of England scrapped pandemic-era restrictions on dividends.

Among individual stocks, Finnish telecom equipment maker Nokia jumped 8% after it said it planned to raise its full-year outlook.

Swiss watchmaker Swatch Group rose 0.9% as it returned to profit in the first six months of 2021 and its sales jumped more than 50%.

Bumper earnings from major U.S. banks JPMorgan and Goldman Sachs also helped sentiment. The European reporting season will kick into high gear later this month, with analysts expecting second-quarter profit for STOXX 600 companies to more than double from a year ago, as per Refinitiv IBES data.