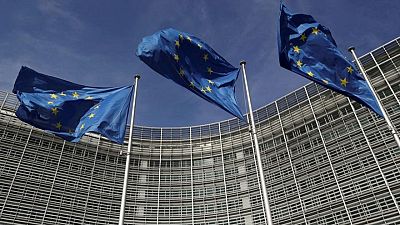 BRUSSELS – EU finance ministers adopted the investment plans of 12 member states on Tuesday, including those of Italy, Spain and France, paving the way for the first disbursements of EU funds to boost the economic recovery from the COVID-19 pandemic.

The European Commission estimates the 800 billion euro ($948 billion) recovery plan, financed through unprecedented joint borrowing and disbursed in grants and loans, could boost public investment to 3.5% of the bloc’s gross domestic product next year, the highest in more than a decade.

Italy and Spain are among the top beneficiaries in absolute terms of the recovery funds.

Arriving to the meeting, EU economics commissioner Paolo Gentiloni said the first “pre-financing disbursements” for the 12 nations would be paid in coming weeks.

The pre-financing amounts to up to 13% of the funds. The money will be paid within two months of the signing of the financing agreements, which is expected later in July.

Further disbursements later in the year or next year will be conditional on the national recovery plans, which must be in line with targets agreed with the EU on a number of issues including reforms and investment on a green transition and job creation.

Plans from the remaining 15 EU countries will be assessed by ministers at a later stage. An extraordinary meeting of finance ministers on July 26 is expected to approve the plans of Croatia, Cyprus, Lithuania, Slovenia and possibly Ireland.

EU Commission vice-president Valdis Dombrovskis told a news conference that the process to assess all plans was on track, although not all EU countries had yet submitted them and more time may be needed to assess Hungary’s plan.

Budapest has been at loggerheads with EU on a number of issues, including civil and human rights.

The EU funds will help fuel the economic rebound after last year’s pandemic-induced crisis, with the Commission estimating 4.8% growth this year and 4.5% in 2022 for both the wider EU and the euro zone, which comprises 19 of the 27 EU countries.

Last year the euro zone’s economy shrank 6.5% and the EU’s 6%, according to the latest figures released by the Commission last week.

The Commission warned, however, that its upbeat forecasts were based on the assumption that restrictive measures would be eased in the second half of the year, and acknowledged the downside risks posed mostly by the more contagious Delta variant which is predicted to become dominant in Europe in August.