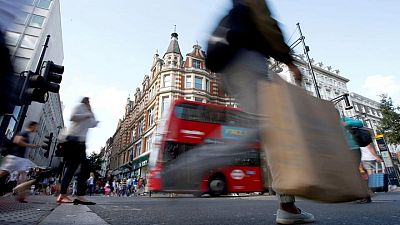 LONDON – British retailers reported a record annual increase in sales in the three months to the end of June, although growth was flattered by widespread store closures a year earlier due to the coronavirus pandemic.

The British Retail Consortium – members of which tend to be large high-street chains and supermarkets – said on Tuesday that sales in the second quarter of 2021 were 28.4% higher than a year earlier and 10.4% higher than two years before.

The year-on-year increase was the largest since the BRC‘s records began in 1995.

While supermarkets have been trading throughout the pandemic, ‘non-essential’ retailers such as clothing stores were closed for most of this year, before reopening in England on April 12. Dates varied in other parts of the United Kingdom.

Total sales in June alone were up 13.1% on two years earlier, compared with growth of 10.0% in May. Versus last year, sales were 10.4% higher on a total basis and 6.7% higher on a like-for-like basis which adjusts for changes in floorspace.

“Fashion and footwear did well while the sun was out in the first half of June, while the start of Euro 2020 provided a boost for TVs, snack food and beer,” Dickinson said.

England’s men’s soccer team enjoyed a successful run in the Euro 2020 international tournament before losing in the final against Italy on Sunday.

Payments processor Barclaycard said its measure of consumer spending was also up strongly in June and stood 11.1% higher than in June 2019. In May, the same measure – which is based on almost half of British credit and debit card payments – showed spending was up 7.6%.

Spending at pubs and bars soared by 38% compared with two years ago, the biggest rise since September, and food and drink specialist stores such as off-licences saw sales jump by 76%.

“June saw Brits flock back to pubs, bars and beer gardens to watch the football and tennis on the big screens, as the heatwave early in the month encouraged many of us to get out in the sunshine and socialise,” Barclaycard’s head of consumer products, Raheel Ahmed, said.