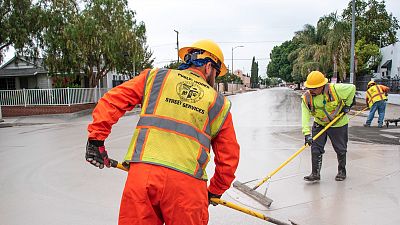 Wildfires currently raging in the US and Canada, stoked by an unprecedented heatwave that began in June, offer a tangible reminder that the world is getting hotter.

A new analysis of the record-breaking temperatures seen in North America found they were "virtually impossible without human-caused climate change".

"Adaptation and mitigation are urgently needed to prepare societies for a very different future," researchers from Oxford University and the Netherlands' KNMI said.

While the most important thing we can do to prevent this is to cut carbon emissions and attempt to limit global heating, cities around the world are already taking steps to tackle extreme heat.

Here are three of the ways cities are adjusting to dramatic changes in our climate and rising temperatures.

"Los Angeles is facing a difficult and challenging time when it comes to heat," Paul Gomez from the city's Public Works Department told Euronews Next.

"Days of 90F plus (30C+) degrees have increased and will continue to do so, especially in areas that are furthest away from the ocean and where areas of shade are limited. We are also seeing heat-related illnesses and deaths occur not only in the summer, but also in the cooler months of the year," he said.

Part of the issue is caused by the city's infamous road network. According to Gomez, some ten per cent of LA's total surface area is tarmac.

"On clear, sunny days, asphalt and concrete heat up as the sun hits the surface, and they slowly release the heat after sunset. This is called the Urban Heat Island effect," urban climate expert Ariane Middel from Arizona State University explained.

"How much heat gets stored in those materials is a function of their reflectivity, also called 'albedo'. Lighter surfaces reflect more solar radiation back into the atmosphere than darker surfaces, so they store less heat from the sun during the day and reflect it back instead".

That's why LA has been painting its roads a lighter shade of grey. Its StreetsLA pilot project has applied the coating to over 50 city blocks, with plans for 200 more to be treated in the same way.

"We have seen the surface temperature on those streets reduced by ten to 15 degrees Fahrenheit (5-8C). Residents in the locations where cool pavement has been installed say they feel the air temperature is slightly cooler," said Gomez.

"We found that the reflective coating cooled the road surfaces by up to 6C," said Middel, who recently carried out a study on LA's reflective roads using a robot assistant dubbed MaRTy.

"Ambient temperatures were reduced by half a degree, which is relevant for building energy use. However, we also found that the heat load on the human body was slightly increased due to the added reflection".

"We are no longer living in the time where you could have a glass facade; this is in the past," Shady Attia, a professor of sustainable architecture from Belgium's University of Liège, said

Attia specialises in designing buildings that can stand up to our changing climate.

The key is to reduce the use of “active cooling” – meaning air conditioning – he says, instead making "small interventions" like automated windows or shades that can be operated remotely via your smartphone.

The concept of an adaptive façade - a building that changes with the conditions - is not a new one. Completed in 2012, the Al Bahr Towers development in Abu Dhabi is an example of a high-tech building that uses automation to keep it cool. As the sun moves across the sky, the towers' computerised wooden shades open and close, reducing the need to air condition their interiors.

But the solutions don't need to be high-tech.

"We can benefit from operable window technology, external shading, simple heat exchangers integrated into façades. Those are really low hanging fruits, low cost, low tech, and they are proven to be robust," Attia says.

"They're very simple but automated. Now, maybe ten years ago this was very expensive. Today it's very cheap".

Ultimately, resilient buildings are those that can bounce back from the shock of extreme temperatures, he says.

"We cannot say that our buildings will not fail. That's not true with climate change, it is severe, it is extreme, it is fatal. So it will happen," said Attia

"Now the question is not to avoid it fully, but to be ready for a shock, be ready for the disruption and bounce back as soon as possible to achieve comfort, and well being without having an environmental cost".

"Up to 50, 60 per cent of cities are unbuilt, sometimes 70 even 80 per cent in some rural cities. We forget that they're not just buildings, they're in fact mostly open space and a lot of that is green space".

All that green space can play a vital part in lowering the temperature in urban areas. According to van der Velde, trees cool their environments in three ways: they shade surfaces, reducing the urban heat island effect, and they “sweat” emitting water vapour through their leaves that cools the air as it evaporates.

"The third way they do it is a combination of the first two which is what we call human thermal comfort. They make you feel cool, which is half the battle," van der Velde said.

While it’s believed green space plays an important role in keeping cities cool, van der Velde's department at TU Delft is working on a project – dubbed iTree 2.0 NL – that aims to back that up with hard data.

By taking measurements from trees of different sizes and ages, the project aims to inform city planners who determine which species of trees are planted and where. They're big decisions to make, when you consider that trees can live for hundreds of years.

"The second thing we're doing is then looking through the lifecycle of the trees, we keep forgetting that trees, from one to one hundred years, they're very different indeed," van der Velde said.

"We have to invert the way we think about infrastructure so that not the hardware but the software, the green space, is the backbone," he said.

"We have to do a kind of paradigm shift in thinking about cities, keeping our trees and green spaces alive and kicking".