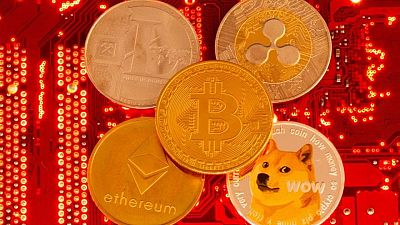 NEWYORK – Cryptocurrency investment products and funds posted outflows to start the second half of the year, as cautious sentiment persisted in the midst of a summer lull, according to data from digital asset manager CoinShares released on Monday.

Crypto outflows were $4 million in the week ended July 9, with bitcoin products showing the most outflows of nearly $7 million in what was the quietest trading week since October 2020. The outflows came after a two-week run of inflows, CoinShares said in its report.

Blockchain data provider Glassnode said in a report on Monday that there are signs of recovery in bitcoin mining, a sector that has been hit hard recently due to China’s restrictions.

Data showed that hash-rate, a gauge of mining activity, has recovered from the peak-to-trough decline of 55% to just a 39% fall. If this holds, Glassnode said this would suggest that about a hash power equivalent of roughly 29% has come back online.

Despite bitcoin’s struggles this year, the world’s most popular cryptocurrency was up about 14% in price in 2021.

Ether, the token used in the Ethereum blockchain, posted a minor outflow of $800,000 the last week. So far this year, ether’s net inflows totaled $961 million.

Multi-asset investment products were the most popular last week, with inflows of $1.2 million. In 2021, these products showed inflows of $362 million or 16.5% of total crypto assets under management of $39.2 billion, which implied that investors are looking to diversify their digital asset holdings.

Grayscale remains the largest crypto asset manager, but has seen its assets under supervision decline further to $29.3 billion as crypto prices slumped.