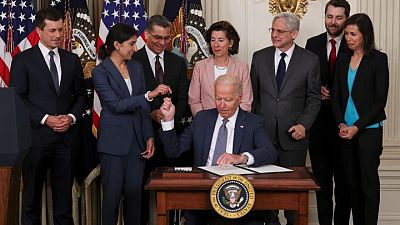 By David French and Sierra Jackson

– Dealmakers expect a new wave of transformative U.S. mergers and acquisitions (M&A), as companies rush to complete deals before President Joe Biden’s antitrust push takes shape, to be followed by a slowdown when regulators start cracking down.

Biden signed a sweeping executive order on Friday to bolster competition within the U.S. economy. This included a call for regulatory agencies to increase scrutiny of corporate tie-ups which have left major sectors such as technology and healthcare dominated by few players.

The order came amid an unprecedented M&A frenzy, as companies borrow cheaply and spend mountains of cash they have accumulated on transformative deals to reposition themselves for the post-pandemic world. Almost $700 billion worth of U.S. deals were announced in the second quarter, the highest on record.

The dealmaking bonanza is set to continue, as companies seek to take advantage of the time window during which regulators frame precise rules to implement Biden’s order, advisers to the companies said. The M&A slowdown will come only when regulators implement the rule changes, possibly in two years or more, they added.

“The order itself will be less likely to have a chilling effect on strategic M&A than the potential chilling effect of a significant increase in the number of prolonged investigations and merger challenges brought by the agencies,” said Michael Schaper, partner at law firm Debevoise & Plimpton.

Spokespeople for the White House and the two main antitrust regulators, the Federal Trade Commission (FTC) and the U.S. Department of Justice (DoJ), did not immediately respond to requests for comment.

Dealmakers were bracing for a tougher antitrust environment under Biden even before last week’s executive order. Last month, the DoJ sued to stop insurance broker Aon’s $30 billion acquisition of peer Willis Towers Watson. And Biden tapped Lina Khan, an antitrust researcher who has focused her work on Big Tech’s immense market power, to chair the FTC.

Alongside the acting head of the DoJ’s antitrust division, Richard Powers, Khan said on Friday they would soon launch a review of merger guidelines to determine if they are “overly permissive.”

“(Khan)‘s already done a great deal to make clear that there’s a new sheriff in town, and her appointment is a signal that the administration, at least the FTC, is looking for some very aggressive action,” said Douglas Melamed, a professor at Stanford Law School.

The White House said Friday’s executive order was aimed at corporate monopolies across a broad swath of industries, and included 72 initiatives which President Biden wants more than a dozen federal agencies to act on.

Private equity firms, which face little antitrust scrutiny in their acquisitions, could benefit from this trend when they acquire companies, dealmakers said. But they and venture capital firms could take a hit when they try to sell companies they have invested in to competitors and peers in their sector.

“My fear is the only one that this is going to hurt is the startup and the venture capitalists who are developing technology that suddenly no longer can sell that to its natural acquirer,” said Louis Lehot, partner at Foley & Lardner LLP.

One area that is poised for special scrutiny are vertical mergers, where a company buys a supplier or someone to which it sells a product. Such tie-ups have been attracting heightened regulatory attention in recent years, especially for technology firms that own both the platform and the content that they host.

Amazon.com’s $8.5 billion proposed acquisition of movie studio MGM is an example of such a vertical merger. A source told Reuters on Friday the transaction was headed for an extended probe by the FTC.