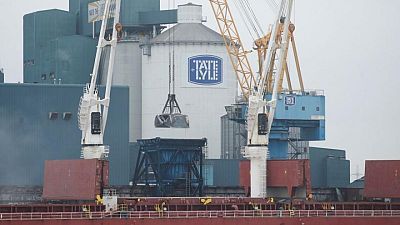 -Tate & Lyle said on Monday it will sell a controlling stake in its commercial sweeteners unit to a private equity firm in a deal valuing the new standalone business at $1.7 billion including debt as it focuses on healthier food and drinks.

U.S.-based KPS Capital Partners and Tate & Lyle, one of the world’s biggest producers of sweeteners, will each own 50% of the new company, with the private equity firm having operational and board control.

The deal comes after a flurry of private equity interest in British companies, including for supermarket group Morrisons, driven by cheap valuations due in part to the pandemic and Brexit.

Tate & Lyle shares rose 2.6% in morning trade as the company said it would return 500 million pounds ($695.00 million) to shareholders upon completion of the deal.

Jefferies analysts said details of the split, talks of which were first disclosed by the company in April, were in line with its expectations.

Tate & Lyle will focus on its food and beverage business that makes low-sugar, low-calorie ingredients that go into drinks, soups, sauces and bakery, while the new company will produce plant-based products for food and industrial markets.

“With the pandemic accelerating the trend towards healthier food, now is the right time to focus our business on capturing this growth,” Tate & Lyle Chief Executive Nick Hampton said.

The new company will consist of the primary products business in the Americas that makes bulk sweeteners, industrial starches and animal nutrition, and an interest in its Almex and Bio-PDO joint ventures. The smaller European operations would remain with Tate & Lyle, it said.

The company said the deal would see it substantially cut its exposure to commodities markets and bulk ingredients in North America.

The split is expected to complete in the first quarter of 2022 following approval from shareholders and regulators.