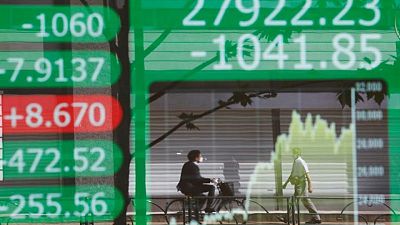 NEWYORK – A gauge of global stocks closed at a record on Monday and U.S. Treasury yields held above five-month lows touched last week as investors looked for signs on whether the Delta variant of the COVID-19 coronavirus could hamper economic growth.

Last week, a bond market rally pushed the yield of the benchmark 10-year U.S. Treasury note to a five-month low of 1.25% as investors worried that climbing cases of the variant could slow the economic recovery. The yield had risen to as high as 1.78% in March as rising vaccination rates fed expectations for growth.

The World Health Organization warned the Delta variant was becoming dominant and many countries had yet to receive enough doses of vaccine to secure their health workers.

Analysts also cited a lack of supply for the drop in yields. Yields were little changed after Treasury sold $58 billion in three-year notes and $38 billion in 10-year notes, with a sale of $24 billion in 30-year bonds set for Tuesday.

Earnings season begins this week, and the market will take in U.S. inflation data on consumer and producer prices as well as comments from Federal Reserve Chair Jerome Powell.

“Earnings season is going to be warmly greeted as an opportunity for existing biases to be confirmed,” said Mike Zigmont, head of trading and research at Harvest Volatility Management in New York.

“Even if forecasts are not as rosy as what the most bullish had hoped, it’s all going to get rationalized away.”

Equity gains on Wall Street were modest, with financials the best-performing S&P sector of the session ahead of results from JPMorgan Chase, Goldman Sachs and Bank of America on Tuesday, but the gains were enough to push each of the three major averages to record closing levels.

Investors will watch Powell’s testimony this week after the People’s Bank of China late on Friday moved to free up $154 billion for banks to buttress the economic recovery while the European Central Bank said it will discuss a change to its forward guidance on policy direction at next week’s meeting.

The safe-haven dollar moved slightly higher on the concerns about the pandemic and its potential to thwart growth.